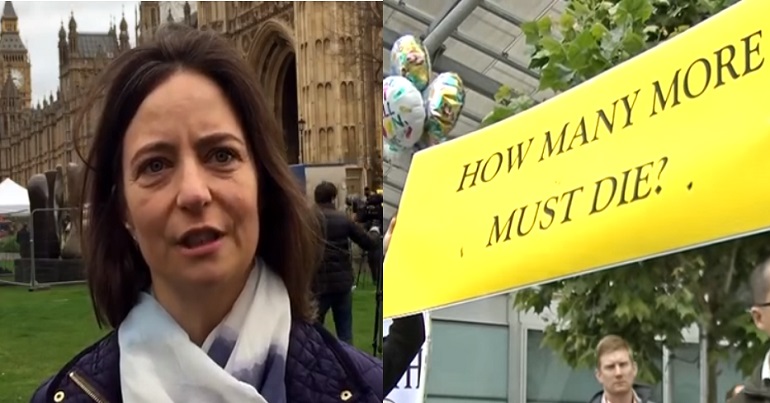 A Scottish National Party (SNP) MP is calling for a debate into the controversy surrounding a disease she thinks will be one of the “biggest medical scandals of the 21st century”.

Calling for a debate

Glasgow North West MP Carol Monaghan has launched an early day motion in parliament on myalgic encephalomyelitis/chronic fatigue syndrome, commonly referred to as ME/CFS. An early day motion (EDM) is a request from an MP for a debate to be held. While the debates don’t always happen, the motions are good for gauging the levels of support among MPs for an issue. They also raise awareness of the particular topic the motion refers to.

That this House recognises Myalgic Encephalomyelitis (ME) Awareness Week from 7 to 13 May 2018, which aims to highlight the impact this invisible illness has on 250,000 people across the UK; recognises the fantastic work campaigners and charities are doing to highlight ME as a physical condition which is not all in the mind; acknowledges the detrimental effect of the PACE trials and its results, and the work which is being done to reverse this; and encourages people to go blue for ME across the week, to further bring this illness out of the shadows and into the spotlight.

For the thousands of people living with ME/CFS in the UK, a parliamentary debate can’t come soon enough.

Can you see ME?

ME/CFS is a chronic systemic neuroimmune disease. While symptoms vary for every person, people living with it often experience:

Between 17 and 24 million people worldwide are thought to be living with ME/CFS. But the disease has been fraught with controversy, not least because, for decades (and often still to this day), the medical profession has not properly recognised it. From talk of “yuppie flu” to the notorious PACE trial, people living with ME/CFS have been disbelieved, stigmatised, given incorrect treatment or ultimately told it’s ‘all in their heads’.

It is this treatment of people living with ME/CFS which Monaghan wants to highlight; specifically the PACE trial. She told The Canary:

I became involved with the campaign after meeting with constituents living with ME. Whilst their lives had been drastically changed by ME, the PACE trial and its recommendations had had a devastating impact on how their condition was medically viewed and treated. The more I learned, the more obvious it was that PACE was deeply flawed, with experts in the research community calling it ‘a textbook example of a poorly done trial’.

The results of the £5m trial, part-funded by the UK Department for Work and Pensions (DWP), were originally published in The Lancet in 2011. But many medical professionals and disabled people alike have dismissed them as damaging and ineffective. In the US in 2016, the federal Agency for Healthcare Research and Quality (AHRQ) downgraded the reliability of GET for ME/CFS patients, saying there was “insufficient evidence of effectiveness of GET on any outcome”. It also said there was “low strength” or “insufficient” evidence about the effectiveness of CBT. In 2017, the US Center for Disease Control (CDC) also removed CBT and GET as recommended treatments.

In the UK, CBT and GET are still the NHS’s approved treatment under guidelines from the National Institute for Health and Care Excellence (NICE). But NICE is undertaking a review of this. Most recently, a new study into the PACE trial’s findings cast even more doubt on it. Using the original methodology, it found that the results for people who tried CBT and GET were overstated.

But as Monaghan told The Canary, the results of the trial aren’t the only concern with it:

Equally concerning was the revelation that the trial was partly funded by the DWP and that key investigators had links to major health insurance companies. The results of this controversial trial have in some cases been used to sanction people living with ME.

You can read The Canary‘s full analysis of the PACE trial here and here. But ultimately, as this journalist knows personally, it has instilled in many disabled people a sense of utter distrust in the medical community. It has caused physical harm and mental distress. And it has also set the research into the disease back years.

People living with ME/CFS are trying to redress the balance, though.

As part of ME Awareness week, on Friday 11 and Saturday 12 May, the ‘Millions Missing’ protests are taking place up and down the UK and around the world. Led by #MEAction, they call on governments and health bodies to:

In the UK, protests are happening in 27 locations (details here). In London, people will gather outside BBC Broadcasting House in W1A from 2pm on 12 May. And Monaghan fully supports it. She told The Canary:

The debate I led in Westminster Hall earlier this year was only the starting point of the campaign to have proper research and treatment for ME. I am currently working on a cross-party basis to bring a wider debate on these issues to the floor of the House. This will ensure the voices of people who have suffered as a result of PACE are heard.

‘Being heard’ is what Millions Missing is all about. With Monaghan raising the issue in parliament and people with ME/CFS doing it online and on the streets, maybe soon the millions of people who have been disbelieved, stigmatised, given incorrect treatment or ultimately told it’s ‘all in their heads’ will get the justice, support and treatment they deserve.

– Write to your MP, asking them to support the early day motion. Details here.

– Find out more about a Millions Missing event near you.