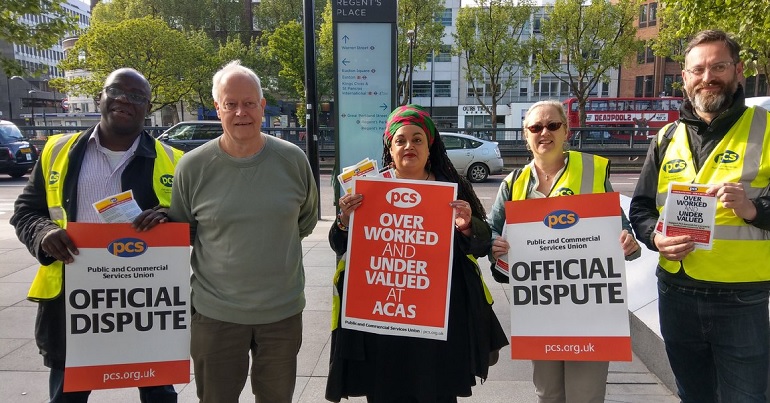 Workers who negotiate in industrial disputes between trade unions and employers have staged a one-day strike themselves. Which in itself says a lot about the UK in 2018 under a Conservative government.

Everybody out! No, really – EVERYBODY

On Friday 11 May, members of the Public and Commercial Services Union (PCS) who work for the conciliation service Acas are holding a one day strike. They are protesting about changes to their workload which the union says have become “unacceptable” and “unmanageable”. In a ballot that PCS general secretary Mark Serwotka called “remarkable”, 83% of members backed strike action, on a turnout of 65%.

The dispute surrounds the downgrading of certain work, the increased workload due to the scrapping of fees for employment tribunals and overall changes to the way Acas operates. PCS previously rejected an offer from Acas, hence the 11 May strike. There is also ongoing action short of a strike:

PCS members who are Acas conciliators are on strike tomorrow, please support on picket lines around the UK inc London, Manchester & Nottingham & with messages of solidarity #conciliatethis #noacascuts https://t.co/yc5jdupXxn pic.twitter.com/z0uTVt19JM

PCS says that if Acas does not come up with a satisfactory offer, there will be a second wave of full strike action on 6 and 7 June.

The union and its supporters have been using the hashtag #ConciliateThis on social media to raise awareness of the strike:

As a trade union organiser I know the huge work & important role that ACAS staff do, solidarity to all strikers. Also, hat tip to whoever in the comms department is responsible for #ConciliateThis 🙌🏻 https://t.co/azGkpfhxkM

The strike has the support of Labour’s John McDonnell and Laura Pidcock:

@johnmcdonnellMP has sent his best wishes & a message of solidarity to @pcs_union members who are Acas conciliators on strike today because of downgrading & workloads. #conciliatethis #noacascuts pic.twitter.com/Pzbusr5rU3

Normally, when a resolution to a workplace dispute cannot be found, ACAS step in to conciliate. Today, @pcs_union members at @acasorguk are on strike, over the imposition of changes & unmanageable workloads. Show #solidarity to them on their picket lines: https://t.co/FjMNFRCJg0 pic.twitter.com/flyTFBUqJ0

We are disappointed that some of our staff have voted for strike action. [Acas has] consulted extensively with PCS around the issues they have raised…

We are recruiting to fill vacancies on our helpline and we have created new jobs across Acas’s conciliation service. Over 75% of Acas’s staff will not be taking part in the strike so our offices and key services… will continue to operate as normal.

A strike for the strike negotiators

But Serwotka summed up the situation in a press release. He said:

Despite months of talks, our conciliator members at ACAS feel they have no choice but to take strike action. It really has come to something when people who run a conciliation service can’t negotiate effectively with their own workforce.

When the strike negotiators take strike action themselves, it shows just how low UK employee/employer relations have sunk. But it also demonstrates the extent to which trade unions have had enough of government reforms to public services. With a huge trade union rally in London on Saturday 12 May, workers across the country will be making their voices heard louder than ever.