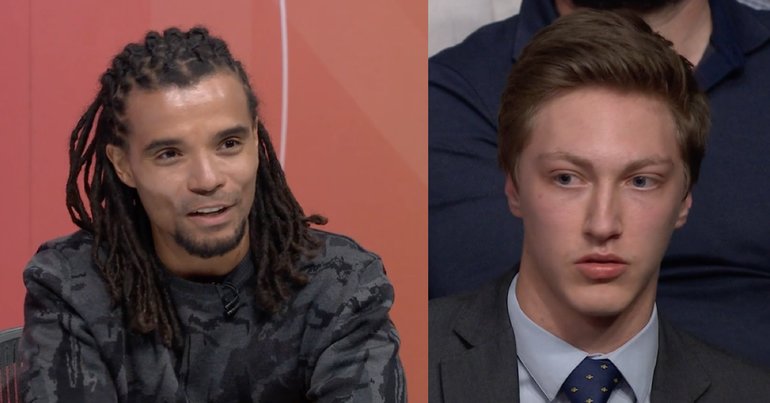 A young man came to last night’s BBC Question Time in a sharp suit. And he came prepared, with one line he believed would destroy any Labour-supporting panellist. But hip-hop artist Akala didn’t even flinch before returning fire, with some painful home truths. The showdown is a masterclass in shutting down everyday racism.

The young man – who Twitter users have branded ‘Young Tory’ – launched into what he clearly believed was his killer question:

Does the failure of Labour to gain ground in traditional working-class towns – like Dudley and Bolton – suggest that Corbyn-mania is dead?

Akala smiled for a moment before making an observation that stopped Young Tory in his tracks:

Akala then asked the questioner what he meant by ‘traditional’ working-class towns. Young Tory suddenly realised that everyone in the room understood precisely what he meant. When he said “traditional working-class towns”, he meant the ‘white’ vote that switched to the Tories as UKIP collapsed. And that’s not a good look. Because that doesn’t mean so-called ‘Corbyn-mania’ is dead, it means racism and xenophobia are still very much alive – and voting Tory.

Just in case anyone hadn’t worked that out, Akala asked Young Tory:

What is the criteria by which you’ve picked your ‘traditional’ working-class towns?

And while the harrowing expression of defeat crossed Young Tory’s face, Dimbleby interjected to save him further blushes.

And as if to prove my point, @akalamusic rips up this Tory plant just like he was Capability Brown…. pic.twitter.com/nU7Z22o1DB

But viewers were in no mood to let him off the hook.

When you pretend to care about the working class but your Tory toff costume gives you away, oh and an actual working class person burns you BADLY #bbcqt pic.twitter.com/E7TbZf0V3l

Congratulations to @akalamusic for his complete takedown of one of the most blatant Tory plants I've seen in ages. #BBCQT

#bbcqt Akala mugged that kid off, when he said "Traditional working class towns" cos its dog whistle for WHITE working class, and the kid had no way of explaining himself absolute loser

By the time all votes were counted in last week’s local elections, it was a good night for Labour. In London, the party won its best results since 1971. For the Tories, it was the worst since 1971. And across the country, Labour won more council seats than the Tories and all the other parties combined.

With all 150 councils declared, the final #LocalElections2018 results are as follows:

Nevertheless, the substantial UKIP local election vote swung to the Tories. This small victory helped save Theresa May from total disaster last week. But the UKIP vote won’t save her come the next general election, where it counts for just 1.8% of the vote. No wonder Young Tory had nothing else to say.