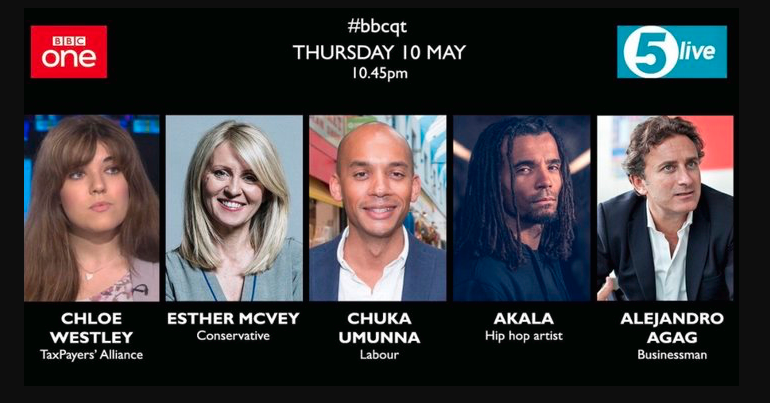 The make-up of the BBC‘s Question Time panel on 10 May left many viewers stunned. Along with work and pensions secretary Esther McVey, the panel included a former conservative politician from Spain, a campaign manager for a right-wing thinktank, and staunch Corbyn critic Chuka Umunna. And many felt the only voice of reason was rapper, poet and political activist Akala.

Before the show went out, many took to Twitter to question the choice of panellists:

A record four Tories on the upcoming #BBCqt

Akala is pretty Left-Wing but apart from him they have the most Right-Wing Labour MP as well as three official Tories. pic.twitter.com/9Zcna135uI

Even by the BBC's pro-establishment standards, having four representatives of the capitalist class on Question Time (5 if you count Dimbleby) is a new low.#BBCQT pic.twitter.com/PxmT5lYGPA

Viewers were concerned that, given the make-up of the panel, fair debate may be stifled:

Yep once again on #bbcqt we have 4 right wingers (5 counting Dimbleby), against 1 non right winger. Guess which one won't be allowed to finish a sentence without interruption from the Chair!🤔 https://t.co/YpOI1OQYiM

They had reason to be concerned.

In 2013, McVey defended the rise in use of food banks. She also said that benefits sanctions ‘teach’ job seekers to look for work seriously. And she cut the Disability Living Allowance, arguing that “bodies heal”.

Chloe Westley is campaign manager for the TaxPayers’ Alliance, a right-wing thinktank partly funded by “prominent supporters of the Conservative party”, reports the Guardian. Meanwhile, Alejandro Agag was formerly a conservative politician in Spain.

Representing the Labour Party was Umunna. The same Labour MP who recently called for an inquiry into Labour’s local election campaign, despite the fact that Labour secured more council seats than the Conservatives. A Labour MP who has continued to publicly criticise Corbyn and supports the values of Labour-right group Progress.

Umunna: pro-austerity, asked how to avoid "trash" on a London night out

#ThursdayThoughts
It is 80% right-wing on #bbcqt this evening.
A right-wing Spanish politician to continue the BBC's bias against Catalunya.
Stain on humanity Esther McVey.
Progress wrecker of Labour Chukka Umunna.
Tax-Dodgers' Alliance.

Every week same Anti labour questions & same grin from Dimbleby on #bbcqt It's no wonder the public feel there is bias because it just gives the Right the chance to abuse, that's not debate

“The Incredible Bias of the BBC”

The Incredible Bias of the BBC – The right wing bias of BBC Question Time tonight staggers belief, even for the BBC. One Francoist, two Tories, the still more right wing Chukka Umunna, all "balanced" by Akala, who thankfully has more brains, and https://t.co/yDr3aEkFTl

In his blog, Murray questioned:

Why is the BBC permitted, day after day after day, to pump out programming which actively promotes a political programme far to the right of where the British population actually stand? With the continual over-representation of nutty right wing groups like the Taxpayers’ Alliance… while left wing groups of much larger membership such as Stop the War are completely ignored.

Concerns about BBC bias are not new. But last night’s episode of Question Time tipped the balance even further. The star of the show was Akala. This straight-talking, eloquent rap artist was the only one to call out the right-wing bullshit. And, for many viewers, he was the best person on the show.