If you look at the actual numbers, media talk of 'peak Corbyn' is total bulls**t - The Canary 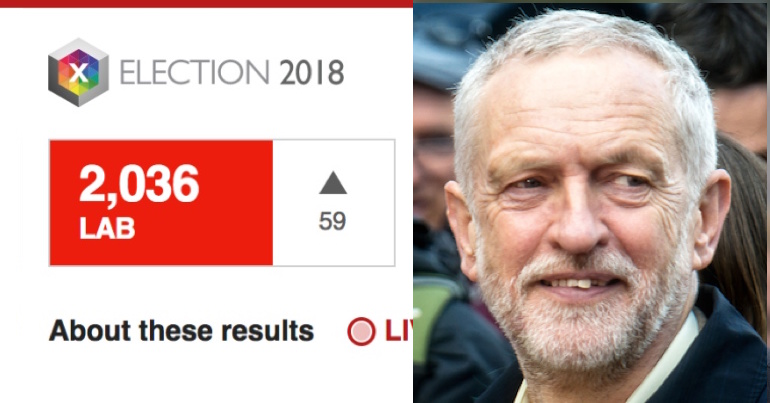 Results are in for the 2018 local elections. And the mainstream media have reported that “peak Corbyn” support is over. But the actual numbers tell a very different story. Because when you look at the election results, this media ‘analysis’ is bullshit.

Labour didn’t secure an overall majority in some key target councils. But the party actually significantly increased the number of Labour councillors across the UK. In London, it looks like Labour is heading towards some of its best results since 1971.

As the UK woke up to the results, Tom Newton Dunn, political editor of the Sun, declared on BBC Radio 4‘s Today show:

One shadow Labour minister said to me this week… that they were pretty convinced – before any votes were cast – that we’re now past peak Corbyn. The country has heard Jeremy Corbyn; he did extraordinarily well, breached all expectations in last year’s general election… It is now quite certain that Jeremy Corbyn is going to be unable to allow Labour to punch through into that majority-winning territory.

Dunn was clearly ready with the “peak Corbyn” phrase at 10pm the previous evening; the very moment the polls closed and reporting restrictions were lifted. By the morning, Justine Greening, the former Conservative education secretary and MP for Putney, told the BBC:

Maybe we are beginning to see something akin to peak Corbyn happening.

And it hasn’t taken long for many UK media outlets to join in with “peak Corbyn” mania.

At the time of writing, Labour had secured:

Meanwhile, the Conservatives had secured:

Many people took to Twitter to point out the discrepancy:

Media narrative seems to be about 'peak Corbyn' and a terrible night for Labour…actual results show LP is up almost 40 seats on 2014's very high baseline – very clear why so many people turning to alt media. pic.twitter.com/A3cxleDA4O

But those Labour gains have been glossed over in the media:

Turn off your TV your Radios stop reading the Lame Stream Media.. stop consuming the anti Corbyn commentariat hate!!! Labour is on the RISE!!!!! https://t.co/v1pOojDUeI

Election reports have been ‘skewed’, with some BBC commentators showing a bias that now seems almost standard. As The Canary‘s Kerry-Anne Mendoza reflected:

Labour GAIN: “This was to be expected and means nothing.”

Labour HOLD: “Very disappointing result for Labour. They threw everything at this.”

Because, according to London Mayor Sadiq Khan, Labour are heading for their best local election results in the capital since 1971:

With results still to come, Labour are heading for our best result in London since 1971 and have made even more progress across the capital. Congratulations to all our newly elected and re-elected @LondonLabour councillors. pic.twitter.com/bmhd2cOy3S

Despite negative press coverage, Labour won 31 seats to secure a victory in Plymouth. This is significant, because in the general election there was a huge increase in Labour support throughout the South West. Labour gained an MP in Plymouth. And two constituencies – Camborne, Redruth & Hayle and Truro & Falmouth – slashed historic Tory majorities. These are are now target seats for Labour in the next general election.

In Trafford, the Labour victory was celebrated locally because:

The last blue patch on Greater Manchester’s council map has been dramatically wiped out after Labour knocked Trafford town hall into no overall control.

In these elections, Labour took over 600 more seats than the Conservatives. Does that really show a lack of support for Corbyn?

And as the results continue to come in, it should be impossible to ignore the fact that even without overall control of some councils, voters have increased the number of Labour councillors across the UK. Or, to put it another way:

One step beyond bias

The reporting of these election results has tipped one step beyond media bias. Far from game over, the results show that there is still widespread support for Corbyn’s Labour. In fact, if mainstream media were fair and accurate, we should be hearing reports about threats to May’s leadership and a crumbling Tory party. But that seems unlikely. What a bloody surprise.