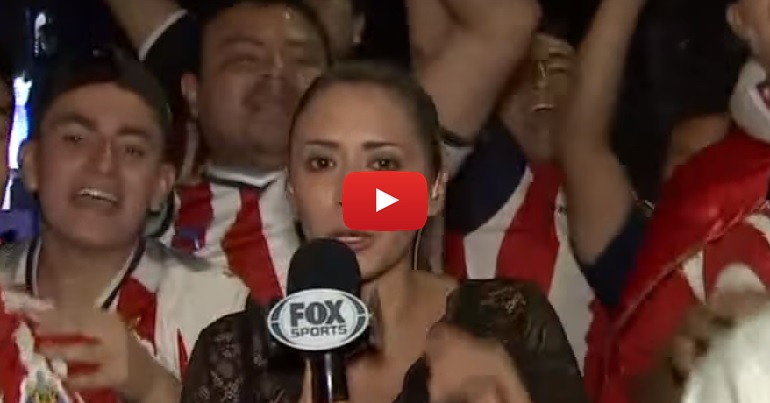 A female reporter has stood up to a man who sexually assaulted her live on air. And her strong response is going viral.

Maria Fernanda Mora is a reporter for FOX Sports in Mexico. And while reporting after a recent football match, one fan sexually assaulted her. As she explained later on Twitter [Spanish]:

He grabbed my buttock. I thought: ‘It might be an accidental touch as a result of people pushing’, and I kept talking to the camera.

This person, emboldened because I didn’t react and kept doing my job, put his hand between my buttocks on two further occasions. I decided to defend myself.

At this point, she turned around and hit him with her microphone:

In her Twitter statement, she said, “I don’t regret the way in which I defended myself”. And she insisted:

Let me be totally clear: the problem is always the aggressor, never us.

Many people quickly took to social media to show their support for Mora. But others rubbed salt into the wound. As the reporter described in her Twitter statement:

I’m alarmed by the hundreds of comments -some accompanied by pornography- in which they tell me that: “I deserved it”, that I’m a “whore”, that they’re going to or that they should have “raped” me, that I was “asking for” it and what did I expect in that situation.

These comments, she said, were proof that “male chauvinism and misogyny are deeply rooted in our society”.

Victim-blaming must stop, and we have the power to stop it

As The Canary has previously reported, there are some public figures in Mexican society who have tried to blame liberal social attitudes for sexual assaults and femicides (the murder of women or girls, usually by men and on account of their gender). And in one case, a judge essentially suggested that a woman’s sexual assault was fine ‘because the attacker didn’t enjoy it’.

These horrific attitudes are unfortunately apparent in the levels of impunity for criminals guilty of sexual assault and femicide. In 2016, for example, Mexico’s National Institute of Statistics and Geography (INEGI) revealed [Spanish, pdf p12] that there had been 43,712 femicides between 1990 and 2015. And as OpenDemocracy has explained, “77% of feminicides are not prosecuted, with a large proportion of bodies never identified”.

One Amnesty International report from 2016, meanwhile, shows a general environment of impunity in Mexico today. Even police officers, it said, had illegally arrested, tortured, and sexually abused dozens of women; and authorities had only prosecuted a small number of the perpetrators. Amnesty’s 2016/2017 report on Mexico also reflected this reality, saying:

In Mexico and around the world, it’s not good enough to just hope women will defend themselves from sexual assault – like Maria Fernanda Mora did. We all need to stand up and be counted. Because if we want a world where men no longer feel they can sexually assault women and get away with it, we need to actively build that world ourselves.

– Read about the Ayotzinapa case (the forced disappearance of 43 student teachers); which the current Mexican government has tried to sweep under the carpet. And see more on human rights in Mexico from Amnesty International.