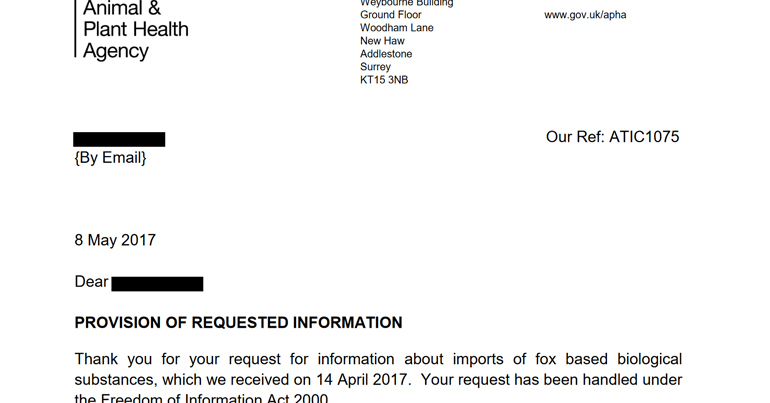 When a motion to ban trail hunting was brought before the National Trust’s AGM in October 2017, the charity recommended its members vote against the ban. This position won. Although members favoured a ban, discretionary votes cast [paywall] mostly by board members swayed the result.

The National Trust’s position was based on a claim it would bring in tighter conditions for hunts. Stricter licensing rules were laid out [pdf, p8-9] in its booklet sent out to members during the run-up to the AGM. This included a commitment to “examine the track record” of applicants; a failed commitment as The Canary has previously reported. But it’s not the only promise the National Trust has faltered on.

In a booklet sent to members informing them of the resolutions at the 2017 AGM, the National Trust said it would [pdf, p9]

prohibit the use of fox-based scents, which we recognise is a major contributor to the potential for accidental fox chases and yet is not a prerequisite for a fulfilling, legal trail hunt.

Trail hunting sees hounds following an artificially laid scent. It was created after the Hunting Act 2004 came into effect. Major hunting advocates including the Master of Fox Hounds Association and Countryside Alliance say the scent is derived from live animals – most commonly fox urine. But it’s not difficult to see why using real fox urine might cause problems.

A report on trail hunting by the International Fund for Animal Welfare makes it clear:

It would be foolhardy to use fox urine and not expect the hounds to also follow live foxes.

For the National Trust, banning all animal-based scents could, in theory, be effective. But in reality, it’s been pointless as it appears the charity hasn’t carried out basic checks on trail hunting.

The evidence for non-animal-based scents is scant. In fact, it flies in the face of what hunts claim trail hunting is about. A February 2018 article by Hounds Off explains:

Hunts continue to train their hounds to hunt the scent of their traditional quarry, not something else. You cannot have a situation where a hunt goes after a fox-based scent on private land on Monday, then an artificial scent on [National Trust] land on Wednesday. Hunting a pack of hounds doesn’t work like that. Training… them to be steady and reliable on one thing takes time and effort.

This is echoed by the Master of Fox Hounds Association, which says using fox urine

…is important because the aim is to keep the hounds focused on the scent of their historical quarry during the time of this ban.

And the Countryside Alliance explains why it believes an artificial scent isn’t an option:

The hounds have been traditionally bred to follow [animal-based] scent and they know what they are seeking. Usually this, rather than an artificial scent, prevents offering the hounds an element of choice which could lead them to deviate onto the scent of other quarry species.

The National Trust claimed to have conducted an “in-depth review” before banning animal-based scent. It should be well aware of an alternative substance. But when The Canary ask about alternatives, the charity didn’t offer a response. And in minutes seen by The Canary of a 9 April meeting between anti-hunt campaigners, director general Hilary McGrady and director of land and nature Mark Harold, this question received a similar lack of response.

Using fox urine, however, isn’t the whole of this problem. In fact, Freedom of Information (FOI) requests to an executive agency of the Department for Environment, Food and Rural Affairs (Defra) show it goes much deeper.

A dispute has arisen over the source of fox urine allegedly used in trail hunting. Hunt members claim to import it. Speaking to SomersetLive in March 2018, huntsman for the Beaufort Hunt Matt Ramsden said:

We use a liquid substance, imported from the USA, that gets put on a rag at the end of a whip.

The Beaufort Hunt was one of 24 hunts licensed to trail hunt on National Trust land last season. And speaking to the freepress in February 2015, huntsman for the Flint and Denbigh Hunt Jeremy Reed said:

But two FOI requests reveal something curious. There’s been no legal importation of fox urine since 2014.

The Animal and Plant Health Agency (APHA), an executive agency of Defra, provided a FOI response dated 8 May 2017 saying [pdf]:

The import of fox-based material into the United Kingdom would require a licence or authorisation issued by the Animal and Plant Health Agency (APHA) or Defra. … APHA do not have a record of licences/authorisations issued… between 2014 and 2017.

APHA have not issued any import authorisations for fox based biological substances in the specified timeframe of 8 May 2017 to the date of your request. 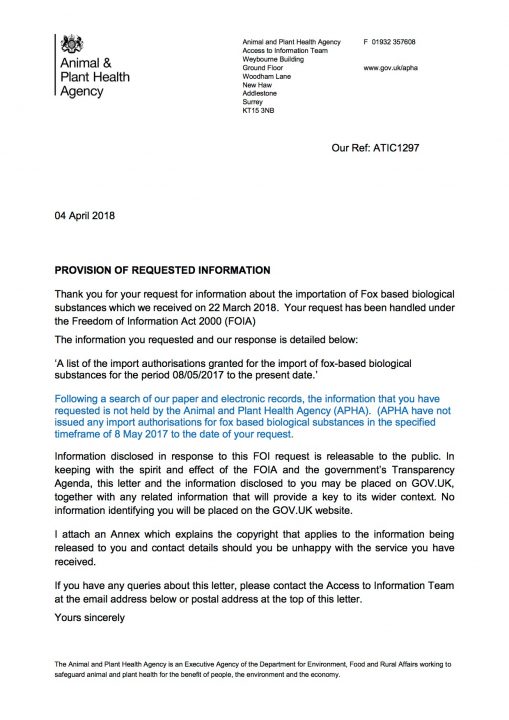 When pressed on this during the 9 April meeting with specific reference to the Duke of Beaufort’s Hunt, the minutes record McGrady’s response simply as:

I understand the point you are making.

This calls into question the National Trust’s claim of “probing the track record of each applicant”, as well as its ability to carry out even basic checks on the hunts it licenses. And it appears to contravene the charity’s statement [pdf, p8] in its 2017 AGM booklet:

We will take, and have taken, strong action… against any licence holders who we judge have breached their licence conditions or the law.

Of the 24 hunts licensed during the 2017 to 2018 season, only the Melbreak Foxhounds had its license suspended – for reasons related to violence. Its failure on this point elsewhere has previously been reported by The Canary.

It doesn’t sound like “much more robust licensing” that McGrady claimed the charity introduced in 2017. But it suggests a degree of leniency given to hunts not given to people opposed to hunting. And a U-turn on another of its points reinforces this.

We want transparency and for our supporters to be able to choose whether to see or to avoid trail hunting events. We will ask for all specified routes and dates of trail hunts in advance and these will be published on a new page on our website.

But there was uproar when the National Trust changed this pledge just days after the vote. On 4 November, the Guardian reported:

There was anger… when the trust said on Facebook that it would not be publishing routes or meeting points following discussions with the police and others.

But the National Dis-Trust cast serious doubts on this claim. On 29 January, it posted on Facebook responses from police forces across England and Wales about contact with the National Trust. Only Cumbria Constabulary confirmed contact and provided the email that it sent to the charity. But its response was clearly specific to the landscape of Cumbria. And it’s also dated 7 November, which was four days after the Guardian’s article.

Minutes show anti-hunt campaigners raised this at the 9 April meeting. They asked why there had been changes to the publication of trail routes. And Harold again claimed this decision was made after “discussion with one police force”.

Such an action makes it very difficult for people to “avoid trail hunting events”. As a result, the National Trust’s U-turn appears to favour hunts at the expense of the general public.

Throughout much of the 9 April meeting, the answer that McGrady and Harold keep returning to is a forthcoming review of trail hunting licensing conditions. A review that comes less than a year after the alleged “in-depth review” that preceded the 2017 AGM.

When The Canary approached the charity with the questions and concerns highlighted, it offered a similar response:

Our new licensing regime is making trail hunts more accountable and less likely to disturb wildlife on our land, thus further safeguarding conservation and access on our land. However, we continue to take any reports of unlicensed activity on our land very seriously, and have suspended a Hunt over one such investigation in recent months. In the next licensing period, monitoring will be further stepped up. We are satisfied our new conditions are rigorous.

But as Helen Beynon, who was present at the 9 April meeting, explains, the stepped-up monitoring currently proposed is questionable:

…this new system will involve each hunt being monitored just once a season, with binoculars! The non-animal scent will be sampled at the same time. Hardly a robust system, particularly as hunts will be prewarned.

Votes were based on incorrect, misleading statements made by the National Trust. And its pledges were made despite extensive criticism by Professor Stephen Harris in the September 2017 report [pdf], The impact of hunting with dogs on wildlife and conservation.

If the charity is now serious about holding hunts accountable to its licensing conditions, many would no doubt welcome that position. But it needs to know this issue is not going away. And we can all act to ensure maximum transparency.

– Support organisations working on this issue including Hounds Off, National Dis-Trust and the Hunt Saboteurs Association.

– Sign a petition from Keeptheban to revoke land use from trail hunts.

– Check out stories about wildlife crime at The Canary.

Featured image via screengrab and article image via National Dis-Trust