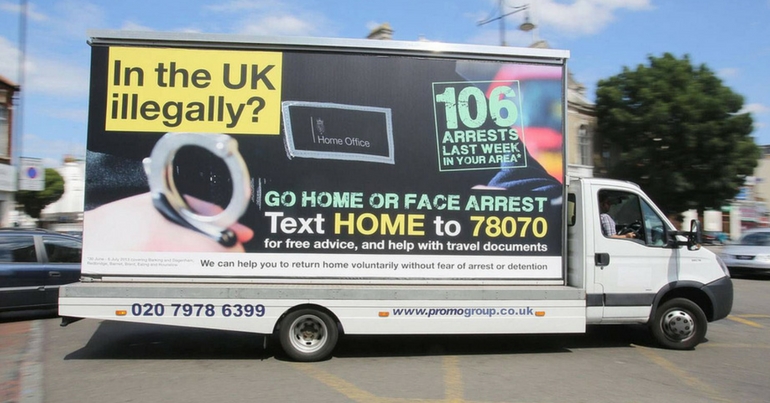 An immigration official told a man facing deportation that his job was to ‘piss him off’, undercover filming has revealed. The man was reporting to Becket House, an immigration reporting centre in London. He secretly filmed his encounter with an official.

In the footage filmed last year, the man says that the weekly reporting regime is worse than being in prison. The official replies:

It’s working because it’s pissing you off, am I right? There you go. That’s my aim at the end of the day.

It’s a challenging environment that we’ve got to make for people, yeah?

This seems to be a reference to the “hostile environment” policy championed by Theresa May when she was home secretary. The policy included the ‘go home’ vans which were approved by May but discontinued after they proved a failure.

The man’s lawyer told the Guardian:

The rationale behind [the hostile environment] policy is to create an environment so utterly soul destroying to live in that people will voluntarily leave the UK.

The 39-year-old man who recorded the footage – who has mental health issues and has self-harmed – has now voluntarily left for Pakistan. He had lived in the UK since the age of 18, and had only ever spent a month in Pakistan, where he says he was driven out by the regime.

He is appealing against his deportation order.

The Home Office told the Guardian:

We are investigating the footage provided. The views expressed in this video do not represent Home Office policy. Any staff found to have breached the civil service code of conduct will face appropriate action. Foreign nationals who abuse our hospitality by committing crimes in the UK should be in no doubt of our determination to deport them.