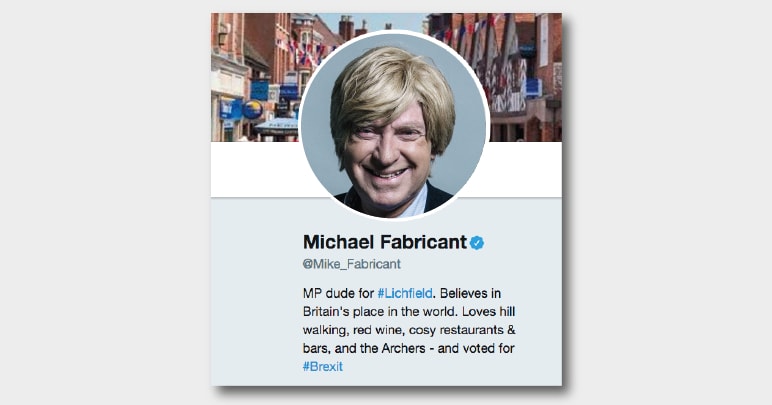 Conservative MP Michael Fabricant has been criticised for calling a 19 year-old woman a “twat”. Rather than just apologising, like a normal person, Fabricant has issued a series of excuses. We’ve now analysed all of them, and concluded that Fabricant’s “twat” comment may have been projection.

You Fabricant do that

If you’re unfamiliar with Fabricant, he looks like Boris Johnson and Donald Trump had an uncle together. 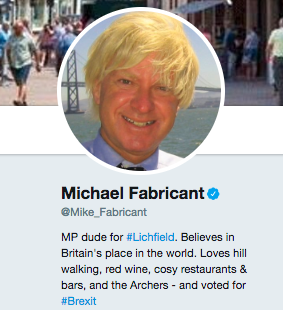 Darcy May criticised a tweet he made on social media:

Fabricant wasn’t about to let some random young woman make a fool of him on social media – not when he could do that himself:

Fabricant launched a series of excuses for his behaviour:

“Snowflake” alert!
Rude twitter person who could be from anywhere (St Petersburg or Glasgow) makes rude comment then “surprised” to be called a twat! Oh, come on!!!
Read this story in full!!!
Typical #Momentum tactics. https://t.co/tgmX8ZoyLR

So here's an alert for @Darcycanfly and others who troll on twitter and feign offence. Professional #Snowflakes pic.twitter.com/eXbvGGcYtk

.Frankly I haven't a clue what it means!
I think of it as 'twit'.

But do any of these excuses hold up?

Fabricant claimed to be unsure if Darcy was male/female or young/old. This is Darcy: 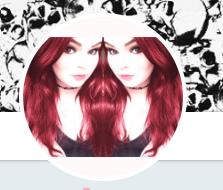 But does gender make a difference? And at what age does a person become ripe for abuse from a sitting Conservative MP? Is it 25? 48? 65? Brandon Lewis failed to outline this in the Tory ‘respect pledge‘, but hopefully he’ll clarify on Twitter.

Another claim is that Fabricant hasn’t got “a clue what it means”. This suggests two things. Firstly, that Fabricant is so detached from 21st century living he barely speaks modern English. The second is he uses words he doesn’t understand to impress people – like a child would.

What does this even mean? Does he think Momentum is based in Glasgow? Does he think the Glasgow branch has taken an oddly specific dislike to the “MP dude for #Lichfield”? Could he be likening Glasgow and Moscow because he thinks they’re both part of the Soviet Union? Or is he just using ‘Glasgow’ as a derogative because he knows that will play well with the sort of doofuses who follows him?

Fabricant also suggests Darcy could be a Russian troll – “there are plenty of those” he points out. This isn’t that great an argument when you consider he didn’t have to reply. It’s a bit like walking into a clothes store, hurling a brick, and saying “it was difficult to tell who was real and who was a mannequin”.

No one is forcing these idiots to hurl anything.

Again, what does this even mean? What bizarre school of etiquette is he subscribed to that maintains abusing women on Twitter is fine but Facebook requires a higher standard?

Also, it’s not like Twitter is some underground fight club. Everything you say on there is incredibly public. Fabricant’s comments were so public they were covered by the BBC.

And how has someone chosen “to be offended” when you used an offensive term to describe them? That’s like hitting someone with a hammer and saying they chose to be injured.

If you want to hurl offence, no one’s stopping you. Just don’t be offended when people take offence at your offence.

The ‘respect pledge‘ was introduced because the party realised it’s important the public don’t think all Tories are – for want of a better word – ‘twats’. Brandon Lewis said:

It’s not just young people, older people are accessing their information through the digital world as well… we’ve got to engage through that medium.

– Contact Brandon Lewis to let him know the ‘respect pledge’ is not being respected.