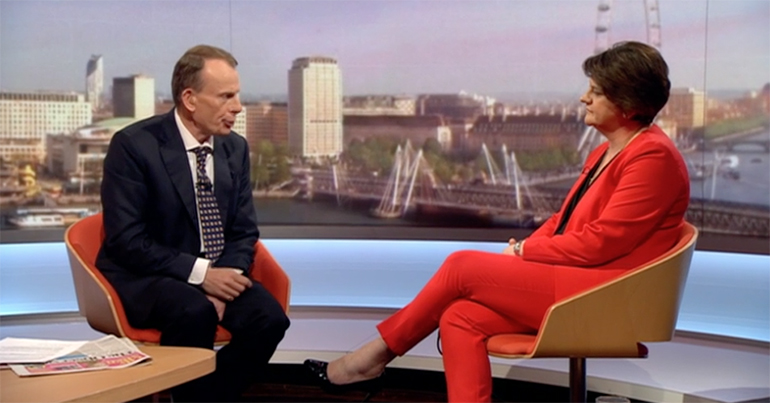 On 6 May, the leader of the Democratic Unionist Party (DUP), Arlene Foster, appeared on The Andrew Marr Show. And while discussing Brexit, she reached peak hypocrisy. Marr reminded Foster of recent comments she made about the EU’s chief Brexit negotiator, Michel Barnier. Marr said:

You’ve said that you don’t really regard Michel Barnier as an honest broker in all of this.

Foster nodded in agreement. The DUP support the UK leaving the EU and also the customs union:

What we’d like to see from the EU says @DUPleader Arlene Foster is “less rhetoric and actually more engagement”. #marr pic.twitter.com/MxMwylvLVt

So let’s look at the DUP’s record in terms of honesty.

The Renewable Heat Incentive scheme attempted to increase Northern Ireland’s use of renewable heating sources. But it turned into an embarrassing financial scandal that cost the taxpayer £490m.

Launched by Foster, this scheme led to the collapse of the Northern Ireland government in January 2017 when Martin McGuinness resigned as deputy first minister. There is still no government.

Foster said Sinn Féin’s standing aside was political. But as this timeline points out, Sinn Féin left after Foster refused to stand aside for her role in the scandal.

At an inquiry into the botched scheme, she denied claims that she prevented note taking at ministerial meetings. But the head of the Northern Ireland Civil Service, David Stirling, reported notes were not taken due to sensitivity over criticism.

The DUP spent £282,000 on a pro-Brexit ad that did not run in Northern Ireland. This was part of a £435,000 donation to the DUP to campaign for Brexit. Foster said the donation was within the law.

Just a year after the Brexit referendum in August 2017, the Electoral Commission announced a £6,000 fine connected to a ‘Northern Ireland political donation’. It is alleged this fine is connected to the DUP donation.

The DUP defends Northern Ireland’s position within the UK. And it continues that defence except when it comes to support for same-sex marriage or abortion.

It opposes same-sex marriage and in 2015, when a majority of representatives in the Northern Ireland parliament voted in favour of it, the DUP vetoed it. It maintains that position today. Senior DUP figures oppose abortion even in the case of rape.

As The Canary previously reported, leaked draft documents of a deal between Sinn Féin and the DUP show it backtracked on Irish language rights.

The DUP claims to represent Northern Ireland yet opposes official recognition of the Irish language. Irish is important to Catholics in Northern Ireland who make up over 40% of the population.

It would be nice to think that a party with the word ‘democratic’ in its title would respect the process of democracy. But we won’t hold our breath on the hypocrisy of its politicians coming to an end any time soon.