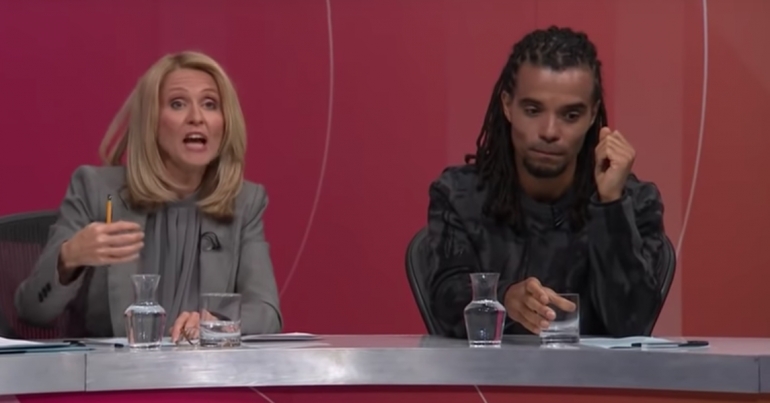 During BBC Question Time on 10 May, an audience member asked the panel:

Does the failure of Labour to gain ground in traditional working-class towns – like Dudley and Bolton – suggest that Corbyn-mania is dead?

And work and pensions secretary Esther McVey used the opportunity to try and smear Jeremy Corbyn and shadow chancellor John McDonnell. But rapper Akala was having none of it.

In light of the local election results, and responding to the question, McVey said:

As McVey continued, Akala had to interject, pointing out:

And you’ve got a foreign secretary who laughs at dead Libyans.

At a Conservative fringe meeting in 2017, Boris Johnson joked that the city of Sirte in Libya could become the new Dubai if they ‘cleared the dead bodies away’.

Following a round of applause, Akala added:

Do you condemn your foreign secretary laughing about dead Libyans?

To which the work and pensions secretary responded:

Pressing her on the issue one more time, Akala asked whether McVey condemns Johnson’s comments. And she refused to give an answer.

Johnson refused to apologise for his comments on Libya. And it looks like McVey also doesn’t believe what he said was vile enough to denounce. Her silence on the issue really does speak volumes.