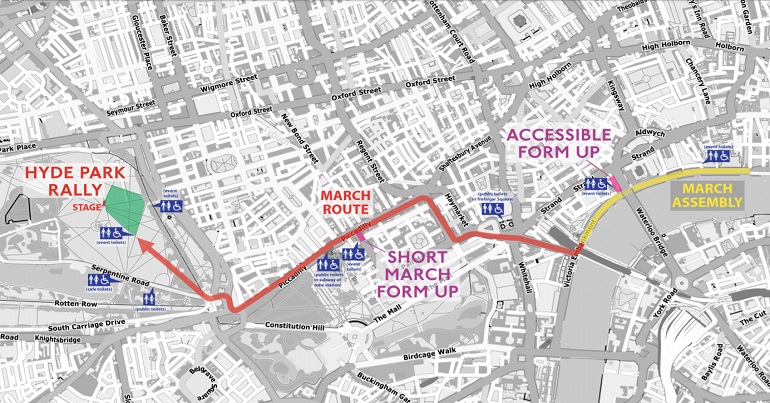 The stage is being set in London for what could be one of the biggest protests of the year. But a campaigning lawyer is urging people not just to observe the event on Saturday 12 May from their laptops or mobile devices. He wants us all to get actively involved.

The Trades Union Congress (TUC) has organised a ‘new deal for working people’ rally. Numerous trade unions, politicians (including Jeremy Corbyn), and campaigners will be joining the march, which assembles at 11am at Victoria Embankment, WC2N 6PA. It will move off at 12pm and march to Hyde Park. The rally will take place in Hyde Park, finishing at 4pm:

The TUC says it’s marching for an “alternative” to the current situation of low pay, zero-hours contracts, and agency work in the UK. Why else is it marching?

We’re marching for the alternative. For a growing economy with great jobs in every nation and region of the UK… A £10 per hour minimum wage and the right to a voice at work. For public services that are brilliant, funded and free at the point of use. And for a society that roots out racism, sexism and discrimination.

A “re-evaluation of work”

Campaigning lawyer Peter Stefanovic will be joining the Communication Workers Union (CWU) block on the march. He told The Canary:

I see a direct correlation between the growth in poverty wages, zero-hours and short-term contracts, and the decline in union membership. We have got to correct that and we need to do it urgently. We’ve never needed our unions more than we do right now. The people must once again unite with our unions who in turn must unite with each other to hold this government to account. It’s time to push back in a way we haven’t seen for decades. What’s needed is a complete re-evaluation of the value of work.

You can hear more of Stefanovic’s thoughts in his video on the campaign:

When 4 Million kids live in poverty, two thirds of them in families where at least one parent has a job, the system is rotten and it's time for workers to push back. That's why I'm joining @CWUnews to support the TUC march for A NEW DEAL FOR WORKERS on Saturday May 12! PLEASE RT! pic.twitter.com/eYZz1nzlQy

But as the TUC recently revealed, the situation specifically with child poverty is worse than previously thought. Research it conducted estimates that the number of children from working households who are in poverty is now around 3.1 million – up by one million since 2010. It also found that:

It really is time for a ‘new deal’. As Stefanovic told The Canary:

History is going to record this time as one of the great periods of social injustice. And with another general election likely to be four years off, barring any catastrophe for the Tories, it’s going to be up to our unions with our support to take the fight to the government. Not just for all workers everywhere but for every man, women and child in this country. Pivotal to this is the revitalisation of our trade union movement. Saturday’s rally is a first step towards that. It will go down in history as a turning point, both for the union movement and for this country.

So there could be history in the making in London on Saturday. And the more people there making it, the better.

Featured image via the TUC – screengrab