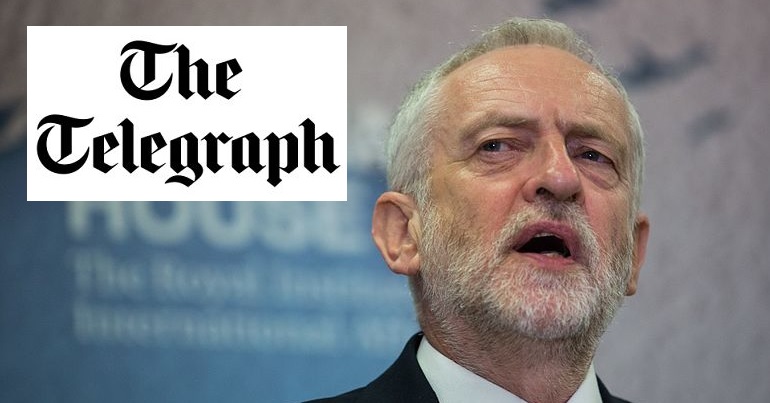 The Sunday Telegraph has paid a big price for one of its most toxic anti-Corbyn smears. A court has ruled that the media outlet published a defamatory article about a mosque leader, who claims it was also an attempt to “damage the reputation” of the Labour leader.

As a result, the Telegraph has removed the article. It has also agreed to pay “substantial damages” to Mohammed Kozbar.

Kozbar is the general secretary of Finsbury Park mosque. And the Sunday Telegraph published an article about him titled Corbyn and the mosque leader who blames the UK for Isil in 2016. As the Guardian reports, the article effectively claimed that Kozbar held views considered extremist in the UK, such as supporting the use of violence by Palestinians against their occupier, Israel.

The article also claimed Corbyn and Kozbar met on multiple occasions. And it featured a picture of the Labour leader and Kozbar shaking hands.

The court, however, found in the general secretary’s favour. The Telegraph has published the court’s ruling on its website. The Guardian reports that the damages amount to around £30,000.

After the verdict, Kozbar said:

It was not just myself who was the target of this article, it was Jeremy Corbyn… The aim was to damage the reputation of Jeremy and make his progress with the Labour party more difficult.

Of course, it’s a rare day in office for Corbyn when smears don’t abound. Britain’s media has variously portrayed him as a Russian stooge, a Czech spy and an antisemite. And these are smears from the last few months alone. Looking further back, the media even tried to convince people he’s the sort of man who dances to the graves of Britain’s war dead.

But as Kozbar’s lawyer, Jonathan Coad of Keystone Law, pointed out, the Telegraph wasn’t only smearing Corbyn and Kozbar in the article. Coad told the Guardian:

While there are many responsible elements of the press, the demonising of Muslims in some parts of it is immensely destructive.

The demonisation of Muslims in sections of the British press is commonplace now. As the assistant secretary general of the Muslim Council of Britain (MCB), Miqdaad Versi, recently wrote in the Guardian:

In the past year and a half, more than 40 stories on issues related to Islam and Muslims have been corrected in mainstream national newspapers following complaints I made.

Meanwhile, Islamophobia isn’t only evident in the press. The MCB has called for an inquiry into Islamophobia in the Conservative Party on multiple occasions. Its most recent call came in April, after Conservative peer Sayeeda Warsi told ITV “there are almost now weekly occurrences of Islamophobic incidents and rhetoric” in the party.

Alarmingly, this open season approach to Muslims comes as Islamophobic hate crimes in London have risen by over 31%.

It is welcome that the UK media is having to erase these toxic smears from the record. And it’s right that they should pay a price for spreading them in the first place. But the cost to our society, to its tolerance, cohesion and democracy, is greater than the financial price any of these outlets have to fork out.

No amount of money could repay us for that.

– Join the fight against racism with Hope not Hate.