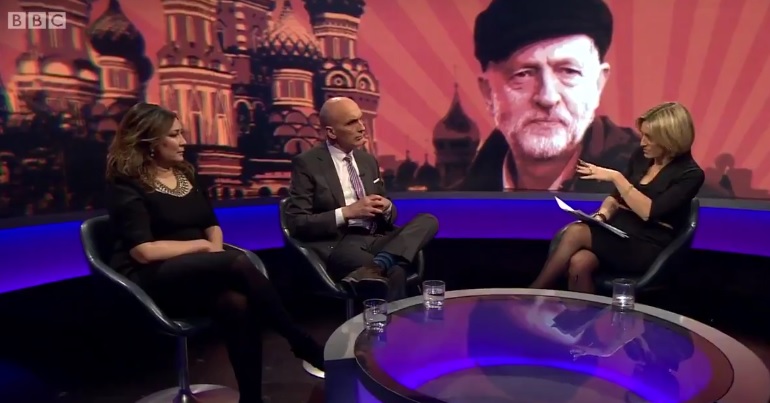 BBC Newsnight stunned viewers with its coverage of Jeremy Corbyn on 15 March. They are saying the BBC crossed a line by portraying the Labour leader as a “Lenin wannabe” in its coverage of his response to the Salisbury poisoning.

“Clearly it looks like the evidence points towards Russia… before we leap into action we need to make sure… we get the facts right” says @DerbyChrisW #newsnight pic.twitter.com/v9D9xI6Wnw

Newsnight covered the poisoning of former Russian double agent Sergei Skripal in Salisbury on the show. In particular, it discussed Corbyn’s response to the event and the government’s conclusion that Russia is responsible. The show’s host, Emily Maitlis, began the segment on Corbyn by asking:

Did Jeremy Corbyn misread the mood of his party in the Commons yesterday when he refused to point the finger at Russia?

The BBC itself, however, appeared to misread the mood of the nation when it decided to accompany its reporting with a backdrop of Corbyn standing in front of the Kremlin. The BBC placed the Russian buildings, and the Labour leader himself, in front of candy-striped red sky. The Labour leader’s old cap, which is much the fashion in recent years, appeared suspiciously pronounced. It’s the one the Daily Mail branded a “Leninist cap”.

But this blatant visual association between Vladimir Putin’s ‘red’ Russia and Corbyn’s ‘red’ Labour didn’t sit well with viewers. And many called out the public broadcaster on it:

I would like to know how this background is unbiased and impartial#BBCBias #newsnight pic.twitter.com/cWYPZlCoUp

That’s not a dog whistle it’s a foghorn..shameful #Newsnight pic.twitter.com/aUjx3CfTzt

Others also called for the relevant parties to hold the BBC to account:

think @Ofcom need to seriously look at this scandalous coverage of the Labour party by #Newsnight tonight. This is supposed to be impartial public broadcaster. British media is becoming a farce. The British public deserve better. https://t.co/zFFdD54exX

If the cap fits…

But this backdrop wasn’t the only questionable choice on the show. Newsnight also asked the question: “does Labour have a Russia problem?” And it proceeded to interview historian Giles Udy on the issue. Udy essentially gave a resounding ‘yes’ to the BBC‘s question.

That’s not surprising, though. Because Udy took part in a debate at York University in 2017 called “This House Believes Corbyn’s Labour is the Real Nasty Party”. He argued against Labour’s Chris Williamson, who was also on Newsnight. On the programme, Williamson told Maitlis that Udy is “obsessed” with painting Labour as fond of Russia.

Williamson was also the lone defender of Corbyn on Newsnight. Everyone else invited on the show to comment on the Labour leader had a history of criticising Corbyn: John Woodcock, Ayesha Hazarika and, as mentioned, Udy.

No wonder viewers thought it wasn’t only the backdrop that was biased.

Corbyn has called the Salisbury poisoning “appalling” and says the government was “right” to implicate Russia in the attack. But he insists the perpetrators must be “held to account on the basis of the evidence”.

That’s not, however, quite the impression unsuspecting viewers would have gleaned from BBC Newsnight about Corbyn’s views. Instead, the programme effectively pictured him as a Russian stooge.

And at a time when the Labour leader says there’s a “fevered parliamentary atmosphere”, that’s a very reckless decision indeed.