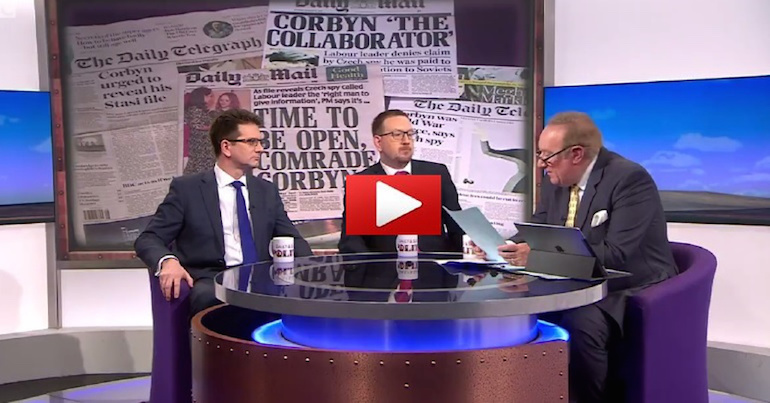 The BBC‘s Andrew Neil accused the government of spreading “outright lies and disinformation” about Jeremy Corbyn on 21 February. Addressing Brexit minister Steve Baker, the Daily Politics host said this was the “real scandal” in the current smear campaign against the Labour leader.

“Has he betrayed his country?” asks @afneil after claim from defence secretary about the Labour leader

"Jeremy Corbyn, I think, is a grave danger to this country because of the ideas in which he believes and what that would mean…" @SteveBakerHW

Another day, another smear

The right-wing media have tried to convince the nation that Corbyn was a Soviet collaborator. They’re basing this ‘scoop’ on the word of a former Czech spy. One who says he created Live Aid and whose claims about Corbyn become more elaborate every time he makes them (that’s what you call a ‘tell’).

Neil raised the story with Baker on his Daily Politics show. Specifically, Neil confronted Baker with some remarks made by his fellow ministers. Neil said:

Baker didn’t answer the question but claimed Corbyn is a “grave danger to our country”. He also insisted that the “free press” in Britain was just doing its job. Neil listed all the evidence contradicting the right-wing media’s claims – evidence that should have stopped the so-called story in its tracks, had the press been doing its job.

The BBC host continued to list other ludicrous statements made by Baker’s colleagues, including saying Corbyn “sold British secrets to communist spies”. And Neil delivered a scathing verdict on the party of government for “piling in” on the media’s smear campaign:

Surely the real scandal, Mr Baker, isn’t what Mr Corbyn has supposedly done or not done. It’s the outright lies and disinformation that your fellow Tories are spreading.

Damn straight, Neil. It’s outrageous enough that British tabloids publish stories about politicians that have next to no basis in fact. But it’s downright scandalous that the party of government has jumped on that smear bandwagon to help its own cause.

Many times on the show, Baker insinuated that Corbyn must answer the questions raised by this smear (he has). But the Conservatives’ behaviour during this desperate campaign raises another very important question: are they fit for government?

I think we all know the answer to that.