So many people have been acquitted of trying to stop the London arms fair, we almost lost count - Canary

So many people have been acquitted of trying to stop the London arms fair, we almost lost count. No, seriously. It’s been that many.

Luckily for The Canary, court supporters from the Legal Defence and Monitoring Group and Green and Black Cross have been keeping track. A spokesperson told us that, out of the 49 cases taken to trial, ten people were acquitted and 27 had their cases dropped – mostly on the basis of the previous acquittals. 12 cases remain outstanding.

Defence and Security Equipment International (DSEI) takes place every two years in London. It is one of the world’s largest arms fairs. The last one took place in September 2017, and over 100 people were arrested trying to prevent it from happening.

The majority of cases have been for obstructing the public highway. Many protesters locked themselves together in the road to prevent the police removing them quickly. Others climbed on top of lorries. And a group of Quakers abseiled off a bridge to stop lorries getting to the site.

Protesters used various defences. Some argued that the road they were on was not a public highway. Others that their protest was reasonable due to their beliefs in what was happening at the arms fair, and that they were trying to prevent greater crimes taking place at the arms fair.

Among protests that the district judges deemed reasonable were people who had locked themselves together in the road, and abseiling Quakers. These are some of the protesters who were acquitted: 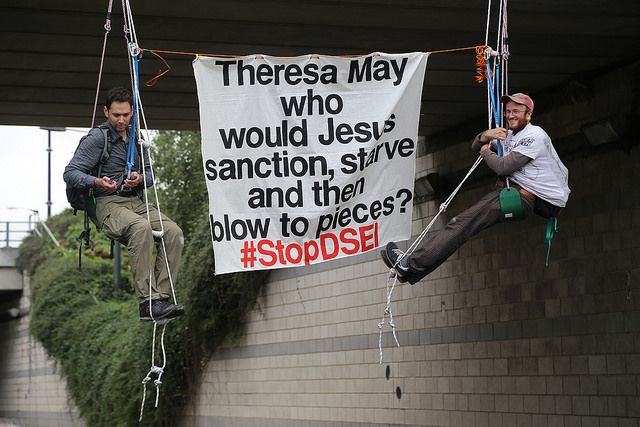 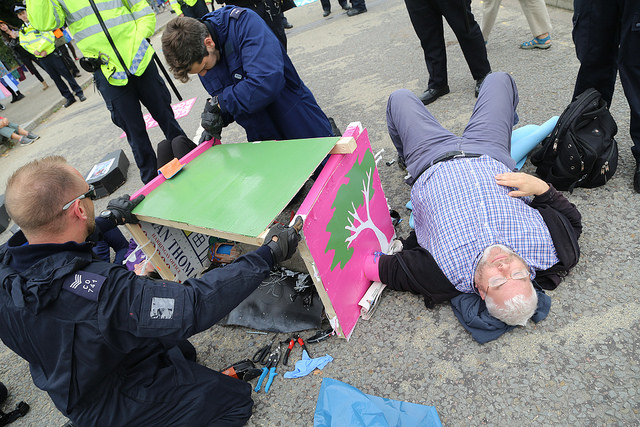 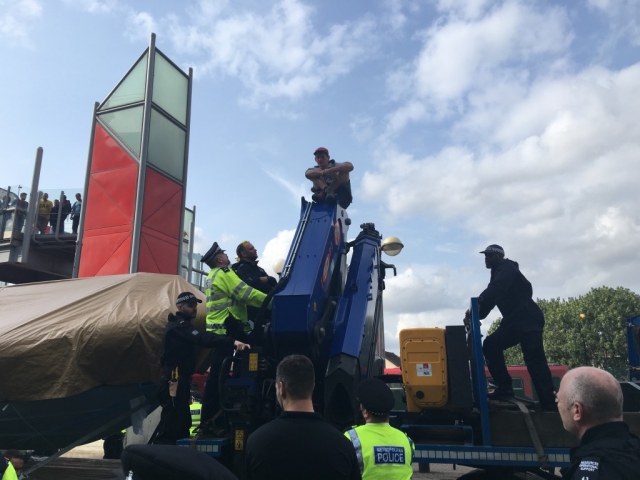 One of the defendants, Sarah Reader, told The Canary:

During DSEI 2017, arms dealers from 56 countries received official invitations to view the wares of 1,600 exhibitors. Nine of the countries invited, including Algeria and Bahrain, had authoritarian regimes. Six, including Saudi Arabia and Colombia, have been listed by the UK as having human rights issues. And a further five countries on the list, such as Ukraine and Pakistan, are currently at war.

Meanwhile, the Saudi Arabia-led bombing of Yemen continues. And so do the arms sales. Since 2015, the UK has licensed £3.8bn of arms to the regime.

Reader described why she had taken action at DSEI:

The companies exhibiting at DSEI are making money from conflict, repression and the consequences of war. This trade fuels violence, and then profits from the border systems, detention centres and militarisation that result from it. We need to dispel the myths around the economic benefits of the arms trade, stand in solidarity with those affected by conflict and bring an end to this climate of fear.

DSEI will take place again in 2019. Reader hopes “the recent acquittals will inspire thousands of people to come and help shut it down for good”. And she believes it is down to all of us to try and stop it:

The European Parliament and the UK’s International Development Select Committee have both said we should stop arming Saudi Arabia and yet the UK continues to invite Saudi Arabia to meet with its weapons suppliers at DSEI. London Mayor Sadiq Khan has said he wants the arms fair banned but doesn’t have the power to stop it. It’s up to us to mobilise in our communities and through our networks over the next year and a half to shut the arms fair down for good.

These judgements put the arms trade under the spotlight. They show that direct action can and does work. And DSEI is going to have a long battle ahead if it thinks it can hold its fair in 2019 without serious disruption.

Featured image via Wikimedia. Additional images via Campaign Against Arms Trade and author’s own