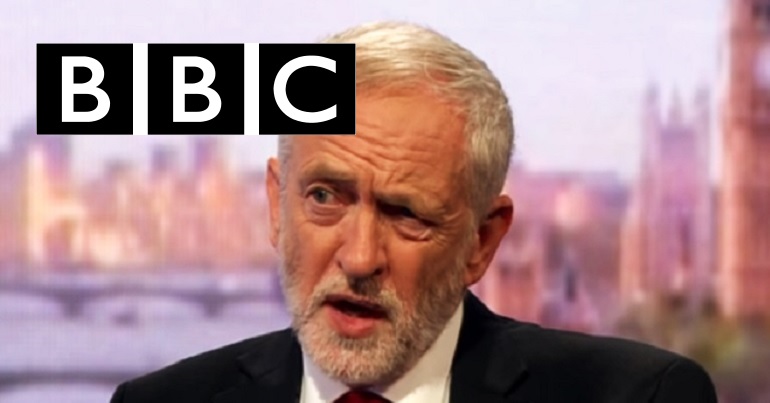 After the media-generated furore over allegations that Labour leader Jeremy Corbyn was a Soviet collaborator in the 1980s, and its subsequent debunking by the BBC‘s Andrew Neil, you’d think other journalists at the broadcaster would steer clear of smearing the Labour leader. But sadly not.

As The Canary‘s Tracy Keeling reported on Wednesday 21 February:

The right-wing media have tried to convince the nation that Corbyn was a Soviet collaborator. They’re basing this ‘scoop’ on the word of a former Czech spy. One who says he created Live Aid and whose claims about Corbyn become more elaborate every time he makes them (that’s what you call a ‘tell’).

Neil took a Conservative minister to task over the unfounded allegation on the BBC Daily Politics show on Wednesday. But prior to this, Corbyn released a video, throwing criticism at the mainstream media in the UK:

The Sun reports that all three major TV networks (BBC, ITV and Sky News) refused to broadcast it because:

Mr Corbyn is repeatedly refusing to give any interviews to explain his past links with Soviet bloc spies so they can freely question him.

Looks like the BBC's Defence Correspondent @bealejonathan has deleted this tweet on @jeremycorbyn. It is outrageous. Another case for @afneil? pic.twitter.com/3nRTgNRVJ9

Beale jumped to defend himself against Media Lens, tweeting:

So apart from the obvious problem with Corbyn being compared to Donald Trump, there are a few other issues with the defence correspondent’s defence of himself.

The UK’s “free press” isn’t actually very free. According to Reporters Without Borders, we currently have the 40th freest press in the world, behind (ironically) former Soviet bloc countries like Estonia and Lithuania. And the UK is also, awkwardly, lower in the Press Freedom Index than both the Czech Republic and Slovakia. Ahem.

What’s more, why should Corbyn take yet more questions from our “free press” on a story that is blatantly false? So much so that Neil let rip about it and even the normally stoic Andrew Marr called the story “rather thin”.

And as for how Corbyn views the free press, it’s little wonder he’s suspicious.

Corbyn vs Trump. No comparison.

A study by the Media Reform Coalition on the so-called ‘Chicken Coup’ against Jeremy Corbyn in June 2016 showed clear bias. Because the BBC gave double the airtime to Corbyn’s critics than to his allies at the start of the coup.

And in January 2017, the BBC Trust found that BBC political editor Laura Kuenssberg had breached the corporation’s impartiality and accuracy guidelines. The breach related to reporting on Jeremy Corbyn and his comments over the ‘shoot-to-kill’ policy of the police.

So no, Mr Beale. Corbyn is nothing like Trump. Not in any way, shape or form. He, like many people, is highly suspicious of a “free press” that has consistently failed to serve the public interest.