A parliamentary question from an SNP MP has forced the government to reveal some disturbing facts about its funding for research into a chronic disease. But when put together with other figures, it reveals a crisis in an area of UK healthcare.

Glasgow North West MP Carol Monaghan asked a written question of health secretary Jeremy Hunt, in relation to research funding for myalgic encephalomyelitis/chronic fatigue syndrome, commonly referred to as ME/CFS or ME. It is a chronic systemic neuroimmune disease, affecting an estimated 17 million people worldwide and around 250,000 people in the UK.

ME has been fraught with controversy. For decades (and often still to this day), the medical profession has not properly recognised it. People living with ME have been disbelieved, stigmatised, given incorrect treatment, or ultimately told it’s ‘all in their heads’. But in recent years campaigning by people living with ME and their supporters has stepped up, with Monaghan being a part of that movement.

So, as part of her ongoing parliamentary campaign, she asked Hunt:

how much funding from the public purse he plans to allocate to biomedical research into [ME] in the current financial year.

Overall, for the three financial years in question, £2,275,312 was spent by the NHS and related organisations on research into ME. This includes funding from the National Institute for Health Research (NIHR) and “other public, charity and industry research funders”.

Of note was the fact that funding was at its lowest level across the three years in 2016/17. But when compared with what’s known as the “economic disease burden” of ME, the government’s spending represents a crisis for people living with the disease.

In 2017, the think tank 2020 Health carried out research [pdf] into how much the ME economic disease burden is. That is, how much ME costs the UK economy in terms of spending on healthcare, welfare payments, and also the loss of wages and productivity. It found, by analysing the data from other studies, the cost was an estimated £3.3bn every year [pdf, p36]. This is an average estimate, with the true cost possibly ranging from as high as £4.8bn to as low as £1.7bn [pdf, p35].

So the government has been spending just £9.10 on research per patient across the three years. But the cost of ME per patient for the same period was £39,600.

But when ME research funding versus patient numbers is compared to other impairments, diseases and illnesses, the tawdry state of affairs is revealed [pdf, 15]. This data is from a report [pdf] by Giles Radford and Sonya Chowdhury om behalf of the Research Collaborative: 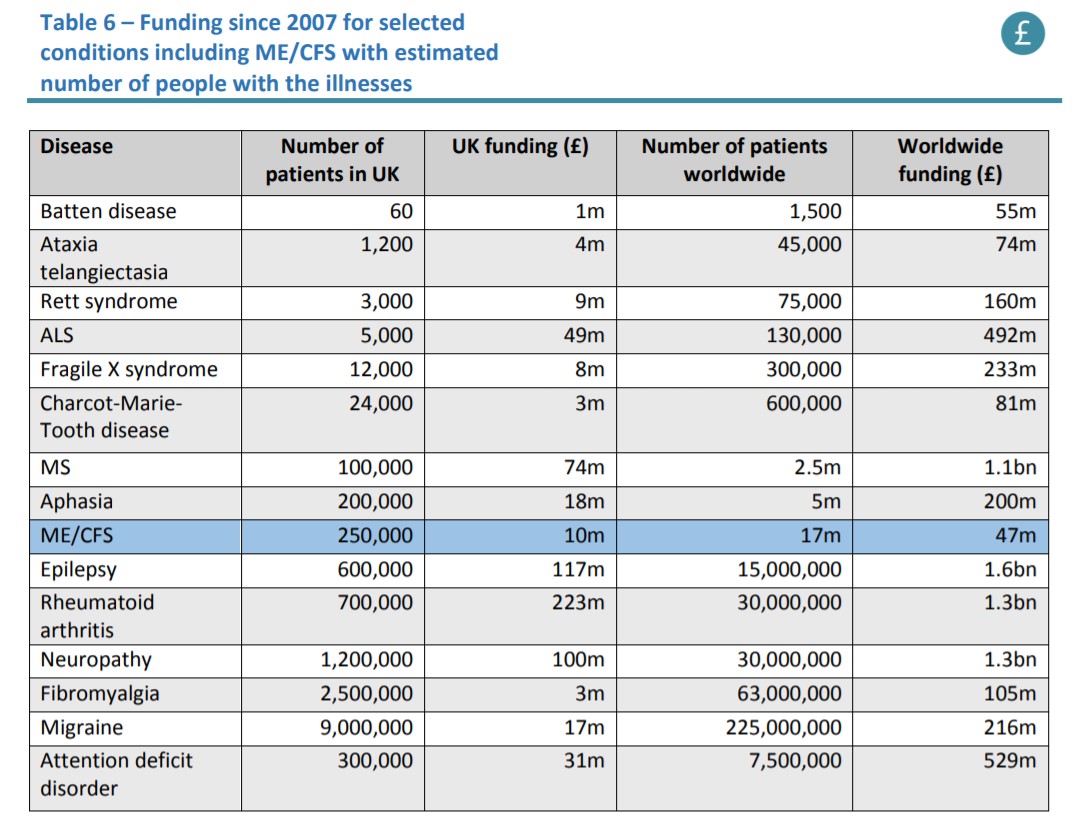 The figures above are approximate. But they give an idea of the disparity in research funding versus the economic disease burden in different conditions.

For example, the mean economic disease burden of multiple sclerosis (MS) across Europe was estimated to be €22,800 (around £20,000) per patient, per year in 2015. The Canary assumes the above funding figures are for the period 2007 to 2015. So, funding per patient, per year for MS was £82.20 versus an economic disease burden of £20,000. For people living with ME, it was £4.40 versus £13,200 respectively. It is deeply unpleasant to have to compare people’s different disabilities like this. But it is important to understand the lack of research into ME.

The DoHSC told The Canary:

Chronic fatigue syndrome is a debilitating and poorly understood condition. That’s why over the past 6 years we have invested £3.35m in research to improve understanding of the condition and to look at new approaches to treatment. NICE is also in the process of updating its guidance on diagnosis and treatment.

The ME Association told The Canary:

These figures are simply pitiful compared to the size of the problem that is ME in this country.

More than 250,000 people are affected by this devastating disease. One in four are so severely affected that they are housebound, bedbound, and in some cases unable to shower, clothe, or feed themselves. Some people are taking their lives because they cannot bear the torture this illness brings.

We cannot therefore understand the disparity in funding between ME and multiple sclerosis, for example…

All we ask for is a fairer share so we can find a cure for this devastating disease sooner rather than later.

Can you see ME now?

People with ME have faced underinvestment, mistreatment and neglect for decades. Research funding is essential to help turn this around.

We score lower on health-related quality of life scores than people with most other chronic illnesses… Yet biomedical funding for 2016-17 was a pitiful £130,958. That’s around 50p for the 250,000 people affected with ME in the UK. Funding needs to reflect the disease burden, both in severity and prevalence in the UK… We will continue to push government to address this.

Our campaign to engage MPs with constituents with ME has helped many see how devastating this illness can be and we are gaining cross-party support to help push this up the political agenda.

The government’s underfunding of ME research should be a national scandal. But the challenge is that the UK is not unique in its dire funding for this chronic and debilitating disease. There needs to be a global sea change into the attitudes of the medical profession and governments. Because the clock is ticking for the ‘millions missing‘, living with ME.

– Read more from The Canary‘s on ME.