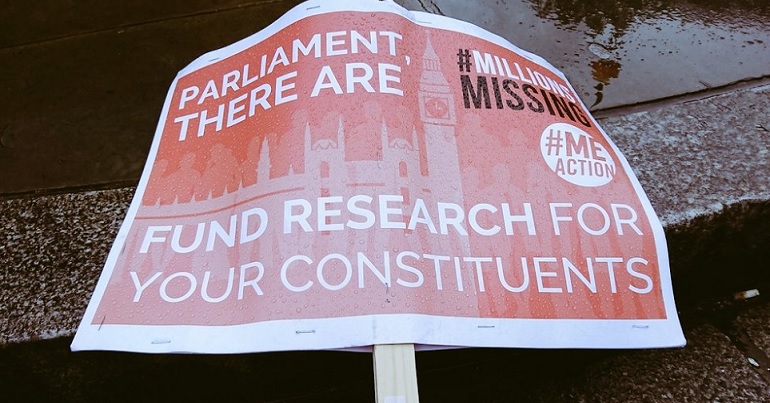 There was a sudden flurry of political activity during the past week over one of the most under-researched and stigmatised diseases going: myalgic encephalomyelitis/chronic fatigue syndrome, commonly referred to as ME/CFS or ME.

ME is a chronic systemic neuroimmune disease. It affects an estimated 17 million people worldwide and around 250,000 people in the UK. But the disease has been fraught with controversy. Not least because for decades (and often still to this day), the medical profession has not properly recognised it. So campaign groups like #MEAction are trying to raise awareness of the disease. And it now seems their message, and that of the ME community as a whole, is dripping through to our politicians.

On Tuesday 5 June, SNP MP Carol Monaghan brought an early day motion, one she’d previously raised, to the House of Commons backbench business committee. Monaghan was hoping to secure a full parliamentary debate into ME. And she partly did; managing to get a three hour Westminster Hall debate on 21 June. Monaghan said in her evidence to the committee:

The big issue for people living with ME is that there has been a dearth of funding into biomedical research. The major funding so far was for a very controversial piece of research called the PACE trial. It considered ME to be a psychological condition, not a pathological one… [ME] is very poorly funded, and most of that funding actually comes from ME charities.

As The Canary previously reported, government funding of ME research is poor. Since 2012, it has invested an average of £558,333 each year into ME research. This is just £2.23 per patient, per year.

Monaghan summed up why she’d called the debate:

There is a real need for us to raise awareness among politicians, the medical community and the wider public, because this is a largely unknown condition, and to push for greater funding into biomedical research.

Her call for a debate had cross-party support, from Labour’s Stephen Pound, the Conservatives’ Nicky Morgan, and Plaid Cymru’s Ben Lake, among others. Monaghan had hoped to secure a full Commons debate about ME. But she accepted the committee’s recommendation that a Westminster Hall debate would mean it could happen sooner; albeit noting that:

The subject will get more publicity if it is in the main Chamber… I really would want that main Chamber debate.

On Thursday 7 June, there was a meeting in the Scottish parliament over ME. It was about a petition brought by #MEAction Scotland:

The petition calls on the Scottish government to review treatment of people with ME in Scotland; specifically [pdf, p1]:

Emma Shorter from #MEAction Scotland, who lives with ME, told the Scottish Public Petitions Committee:

I went from hill walking and hockey playing to struggling to move my hand to lift a glass of water.

She also recounted how the current treatments for ME, recommended by the NHS, ended up making her much worse – eventually leaving her needing a wheelchair.

The committee listened to evidence from Shorter and others about current treatments for ME, the situation surrounding research and what campaign groups like #MEAction Scotland think governments should do. The committee will gather more evidence before reporting back to the Scottish government. But it immediately said it would be writing to the Scottish government about the petition, specifically regarding its call for more research.

But while all this went on, the UK government still showed it was in denial over the controversy surrounding ME. Because on 5 June, it finally gave a response to an official question it had been asked weeks earlier.

Back in May, the crossbench peer, Countess Margaret of Mar, asked the Department of Health and Social Care:

upon what scientific evidence the promotion of… [CBT] and… [GET] in the Improving Access to Psychological Therapies programme is based; and what assessment they have made of recovery rates for patients with… [ME] from pilot programmes of such therapies.

Mar’s question seemed intentionally loaded. She was referring to the results of the notorious PACE trial. It claims people living with ME can improve, and sometimes recover, by having CBT and GET. It’s these treatments that Shorter was referring to in her evidence to the Scottish Public Petitions Committee.

The results of the £5m trial, part-funded by the UK Department for Work and Pensions (DWP), were originally published in the Lancet in 2011. But many independent scientists, medical professionals, and disabled people have dismissed them as damaging and ineffective due to multiple, methodological flaws in the trial. Part of #MEAction Scotland’s evidence to the Public Petitions Committee was about CBT and GET; specifically asking for them to be removed from NHS Scotland as treatments for the disease.

The US government has either downgraded or removed the PACE trial findings as recommended treatments. But in the UK, CBT and GET are still the NHS approved treatments for ME, as Lord O’Shaughnessy, responding on behalf of the government on 5 June, confirmed to Mar.

The flurry of activity in both the Scottish and UK parliaments is encouraging. All the more so given that patients are still often disbelieved, stigmatised, given incorrect treatment or ultimately told it’s ‘all in their heads’ by some medical professionals and society. While the political tremors about ME will surely be welcomed by all those living with this devastating disease, we now need an earthquake to push it to the top of the political, medical and scientific agendas.

– Find out more about the Millions Missing campaign. Also, donate to #MEAction UK Crowdfunder for a UK organiser.