The DWP just revealed the results of its new 'back to work' project. Oh dear... - Canary

On Thursday 7 June, the Department for Work and Pensions (DWP) published the results of a trial of its latest back-to-work programme. All things considered, it was a fucking disaster.

Another day, another DWP cock-up

The two-year trial [pdf, p27] of 10,600 claimants was part of the DWP’s “Personalisation Pathfinder” programme. It’s essentially a strategy of intensive and personalised support to get disabled, sick and unemployed people back into work, or improve their health and wellbeing so as to prepare them for employment.

These are the methods the trial used: 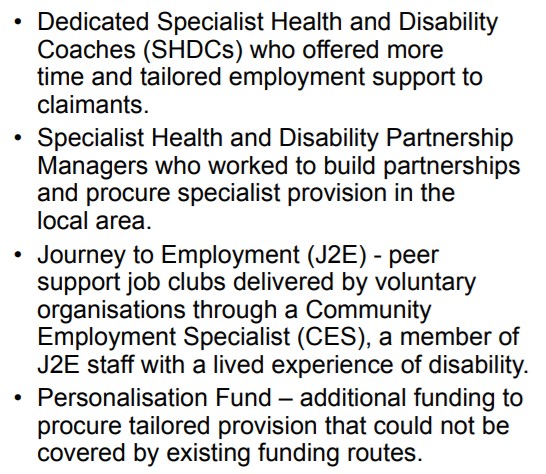 It was a disaster, even by the DWP’s own standards.

Just three in ten claimants were in work 12 months after joining the programme [pdf, p3]. 52% did report [pdf, p3] an improvement in their dubiously-self-assessed “wellbeing”, but 37% said it actually deteriorated. Three in ten reported [pdf, p3] improvements in self-measured social isolation, but “the proportion of claimants who reported a deterioration in levels of social isolation was only slightly smaller”. And the number of people saying they could manage their health condition “very or quite well” only went up by six percentage points [pdf, p132].

Hardly a roaring success. But when you look at how and why the DWP introduced the programme, it’s little wonder it ended up being such a clusterfuck.

The programme, and much of the DWP’s thinking in recent years, has been influenced by “nudge theory“. That is, if you apply pressure, use subconscious methods, or basically just manipulate people, you can change their behaviours and therefore their life outcomes. One such example of the DWP applying nudge theory is the sanctions regime. I can thoroughly recommend reading Kitty Jones’s evaluation of this.

The Personalisation Pathfinder programme is all about steering, or nudging, people back into work. For example, it uses [pdf, p82] “Community Employment Specialists” (disabled people who’ve found work) to support claimants in “job clubs”. They are disabled people who’ve magically become well enough to work – essentially saying to claimants: ‘Look! This can be you if you try a bit harder! Look what life could be like!’

The job clubs themselves use [pdf, p81] “a range of confidence building activities designed to change attitudes towards employment”. Nudging much?

Preposterously, page 54 of the document [pdf] states that DWP staff had to essentially trick claimants into going onto the programme. As one anonymous DWP staff member said:

We started off with the script that we were given, which didn’t really work at all. It’s about it being voluntary… once they heard that they said ‘No, I’m not interested. Bye.’ and that was the end of it. We re-worded that completely, and did seem to get results.

The theory of nothing

Underpinning just how the DWP measured the success of the programme was a model [pdf, p28] based on the ‘Theory of Change’. This pseudoscience seemed to emerge out of the liberal left triangulation of the 1990s.

The Theory of Change is a tool to measure the success of programmes and initiatives in the civil society and charitable sectors. But naturally, it was designed to give these politically centrist do-gooders the results they wanted to hear. As Geoff Mulgan wrote for the Nesta foundation, the Theory of Change assumes that:

inputs lead to outputs, and that outputs lead to outcomes. This sometimes happens. But anyone familiar with systems thinking will be dubious of linear explanations, especially where complex social phenomena like homelessness, poverty or isolation are concerned.

But the DWP appeared not to be dubious about it at all; allowing it to guide the evaluation of the programme. It’s even more staggering that this evaluation technique would be applied in the realms of the welfare state, when by its own admission 96% of claimants said [pdf, p2] they had multiple health conditions or disabilities. Surely, the results should be tested against scientific measurements of claimants’ mental and physical health? Not some bullshit, Third Way pseudoscience.

Moreover, the research did not have a control group to measure the claimants against. So the DWP couldn’t tell if these people would have got a job without the programme. Nor could it tell if people’s health conditions would have improved either. Also tucked away in the report is the recommendation [pdf, p56] that the first part of the programme should be “mandatory”, meaning if a claimant doesn’t do it they’ll be sanctioned.

But herein lies the crux of why the DWP designed the Personalisation Pathfinder programme in the first place. Because underpinning its strategy now is the notion [pdf, p40] that ‘work is a health outcome’.

For example, with this specific programme, the DWP introduced [pdf, p45] the “Specialist Health and Disability Coach” role. It said [pdf, p46] this person’s “overall goal” was to:

get claimants into employment, and improve their general wellbeing and ability to manage their health condition or disability.

So were these people nurses? Or doctors? Perhaps they were psychologists?

Nope. The Specialist Health and Disability Coaches were DWP Jobcentre staff. These were people who probably had little or no medical knowledge whatsoever. And yet they were responsible for improving claimants’ management of their health conditions. The DWP’s own report even admitted [pdf, p47] that:

Training was sometimes felt to be insufficient, particularly for individuals who had no prior experience of working with claimants with health conditions.

It’s this sudden ability of the DWP to morph into the NHS which drives many of its reforms.

The DWP: walking on water and curing the sick

As I previously revealed, the DWP is ‘encouraging’ (or coercing) doctors to push their patients back into work. Also, in April, the government released its first set of data from the Improving Access to Psychological Therapies (IAPT) employment adviser trials. This is where the DWP is co-opting the NHS, by putting [pdf, p72] Jobcentre staff into therapy settings to get people back to work. DPAC calls this “psycho compulsion”.

Then you have the continuing controversy over the so-called PACE trial – i.e. research partly funded by the DWP that claims people living with myalgic encephalomyelitis (ME) and other ‘invisible illnesses’ can think themselves better and return to work. Because obviously their symptoms are ‘all in their heads’.

What’s more, a freedom of information request (FOI) revealed [pdf, p8] that sick and disabled people who do have a GP fit note but have not had a work capability assessment (WCA) will be subject to ‘all work-related requirements’ to get their benefits. So now, apparently, you are only sick or disabled when the DWP says you are – regardless of medical fact.

The ultimate goal of all this? To redefine sickness and disability to such an extent that everyone who could do the minutest amount of work should. The DWP is magically curing claimants and getting them back to work. Regardless of whether the work may actually make them sicker, or even kill them, or not. And for the rest? A life of isolation, marginalisation, and begging for a pittance from the government.

The Personalisation Pathfinder programme is hypercapitalism in its purest form. The phrase ‘work ’til you drop’ has never been taken so literally.