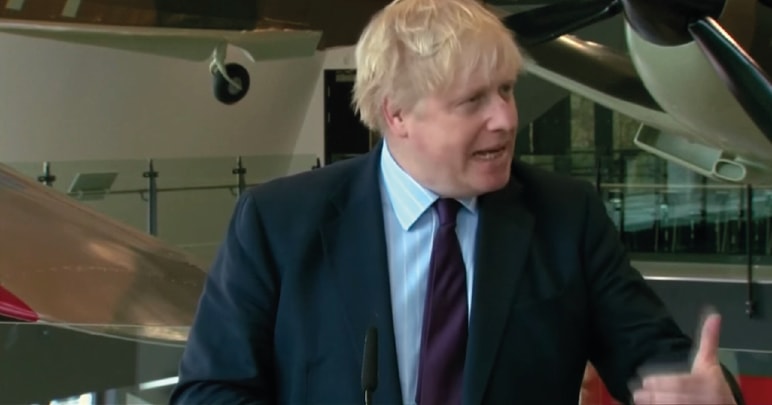 Boris Johnson famously wrote an unpublished newspaper article that criticised Brexit two days before he came out in support of it. For this, and other reasons, people have accused Johnson of not thinking Brexit through. And yet, recently leaked comments suggest Johnson is worried we’re over-thinking it.

Johnson was speaking at a private dinner for Conservative activists on Wednesday 6 June. A recording of his speech was leaked to BuzzFeed. He criticised the UK’s Brexit stance, saying:

I am increasingly admiring of Donald Trump. I have become more and more convinced that there is method in his madness.

Imagine Trump doing Brexit. He’d go in bloody hard… There’d be all sorts of breakdowns, all sorts of chaos. Everyone would think he’d gone mad. But actually you might get somewhere. It’s a very, very good thought.

BuzzFeed described this section as ‘joking’. The problem is that it’s difficult to tell where the ‘joke’ politician ends and the serious one begins. Especially as he’s also known for using ‘humour’ to deflect. And masking real intent in ‘ironic banter’ is a tried-and-tested right-wing move.

As you can imagine, Johnson has been taken to task over his comments:

Every single thing Boris Johnson does, says or leaks is designed solely & exclusively to advance the cause of Boris Johnson. In his personal, political & professional lives nobody else has ever mattered one jot. No wonder he’s fluffing Trump now.

Boris Johnson was sacked twice for lying – by The Times for making up quotes when a trainee reporter then by Tory leader Michael Howard for lying to him about an affair. I don't mind you trying to patronise me but don't cover up for him https://t.co/OzUDONOukl

At one point, Johnson also discussed the border issues that are causing Brexit negotiators such a headache. BuzzFeed reported Johnson’s take on the matter:

There would be disruption, Johnson said. “Yeah, of course. There will be some bumps in the road.”

But the warnings had been overblown.

The “prophecies of doom” about disruption of customs are “pure millennium bug stuff,” Johnson said, referring to the hysteria about Y2K at the turn of the millenium.

“All the planes crashing from the sky. It’s absolute nonsense.”

People online pointed out the problem with Johnson’s comparison:

I saw Blunderfuck Boris Johnson saying "Border concerns are 'pure millennium bug stuff'". The millennium bug was averted because people – myself included – put a shit load of work into making sure it wouldn't be a problem when the time came. Not sure that's a comparable analogy.

Boris, the ‘millennium bug’ was headed off by one of the great civil engineering exercises of our time – billions of lines of code were rewritten and exhaustively tested. What’s your plan for Brexit ?

Johnson’s solution to the technological problems of the border is simply that we “solve” them:

That’s what we want. Solve the technical problem. We can easily find a solution that allows us to have trade that is [as] frictionless as possible… with our continental friends and partners while still [being] able to do free trade deals. It’s not beyond the wit of man.

The problem is that the ‘technological solution’ to the border is currently “untested”. The House of Lords EU Committee expressed doubt that:

the technology required… to resolve the Irish border issue could become operational under the timetable for Brexit currently envisaged.

Which is a serious warning given the track record of UK governments when it comes to technological solutions.

The full BuzzFeed piece has more nuggets of wisdom from Johnson’s speech. But perhaps the most worrying is that Johnson told activists about conversations he’s having on North Korea:

Of course we’ve got to help the Americans do this thing…. I just talked to Mike Pompeo, my counterpart in the US State Department. What they want us to do is to use our nuclear expertise to dismantle Kim Jong-Un’s nuclear missile. That’s what he asked me to do today.

This could be the biggest ‘blunder’ of the whole speech. Especially as the proposed North Korea talks have already run into difficulties. Partially, because the American administration talked of a ‘Libya model’, which reminded the North Koreans that Gaddafi was killed by an angry mob backed by the West only a few years after he relinquished his nuclear weapons.

Although North Korea seems willing [paywall] to discuss de-nuclearisation, it hasn’t yet agreed to it. As such, Johnson telling anyone who’ll listen he’s going to lend our “expertise” to disarming Kim Jong-un’s nuclear armory isn’t really productive.

The Foreign Secretary giving the inside track on our foreign policy and diplomacy strategy to a handful of half cut Tory activists at a private dinner. And of course he won’t get sacked because the PM is too weak to do so. Par for the course with this shambolic government. https://t.co/mdLgzWfqfu