May fails to convince the nation despite minimal effort - Canary 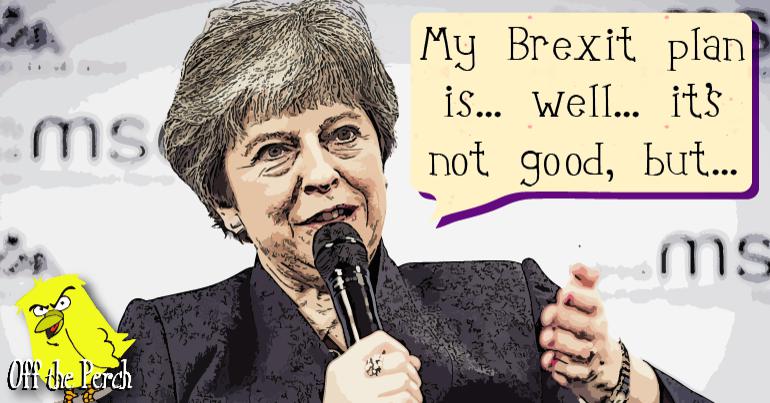 When Theresa May announced her Brexit strategy, it didn’t prove very popular. This gave her just over ten days to engage in the political fight of her life. May isn’t much of a fighter, though, meaning she spent her time shadowboxing.

May planned on going around the country convincing people to vote for her deal. This seemed paradoxical, as the only people allowed to vote on it were the MPs at Westminster. It didn’t really matter in the end, as May didn’t convince anyone anyway.

Her trip to Scotland was particularly good, as May spent the entire trip in a container with no windows. She did allow some Scottish journalists into the container so she could tell them:

She then pretended to drink Irn Bru for the cameras. Eagle eyed observers spotted that she’d replaced the Scottish tipple with Bovril, however, as the can steamed and gave her a sticky moustache.

Perhaps the highlight of May’s tour was the bit when she challenged Jeremy Corbyn to a debate. It turned out she’d conspired with the BBC to adopt a format in which host Lynn the vicar asked questions like:

Theresa May, could your Brexit plan be any more perfect?

Jeremy Corbyn, my friend Lynn the psychiatrist told me you have secret fantasies about murdering puppies; have you ever followed through on these sick urges?

Labour refused this, obviously, which meant May had to pull out of her own debate. Although pulling out gave May some bad press, it’s nothing compared to how bad she looks when she actually shows up to things.