Theresa May tries to reanimate her dead Brexit plan - Canary 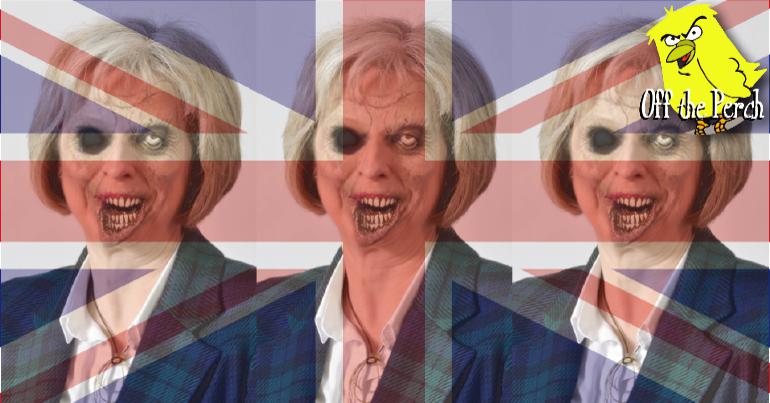 The EU said it wouldn’t renegotiate Theresa May’s dead Brexit deal. That didn’t stop May from heading to the EU to try – although ‘try’ is a strong word for muttering “Brexit means Brexit” at a room full of confused people.

Off The Perch caught up with Durham University’s professor of analogies to get a colourful explanation of what happened:

May’s Brexit deal was a real Frankenstein’s monster – one made from parts which didn’t even match. That’s why it had three left feet, no brain, and hundreds of balls.

When the people saw this horrific, mindless creation, they did what anyone would – they took their pitchforks out and destroyed it. As they did so, May stood to one side and said, ‘look – it’s my monster or no monsters at all’.

Despite being given the chance to just stop, May had another idea. She gathered together the parts of her Brexit monster and strapped them back into the Monster-Nator-5000. But this time, she made even less effort than before.

The professor finished his analogy by saying:

When the lightning struck, the improperly earthed machine caught fire. As you’d expect, the horror flesh began to char and melt. The people she’d gathered to watch looked on in horror. The PM, meanwhile, said that if we all pitched in, we could shovel what remained into a wheelbarrow and it would be ‘job’s done’.

But what’s ‘the job’, Theresa? What the fuck are you even doing?

When he’d finished, the professor apologised for not being able to think of a sufficiently graphic analogy.