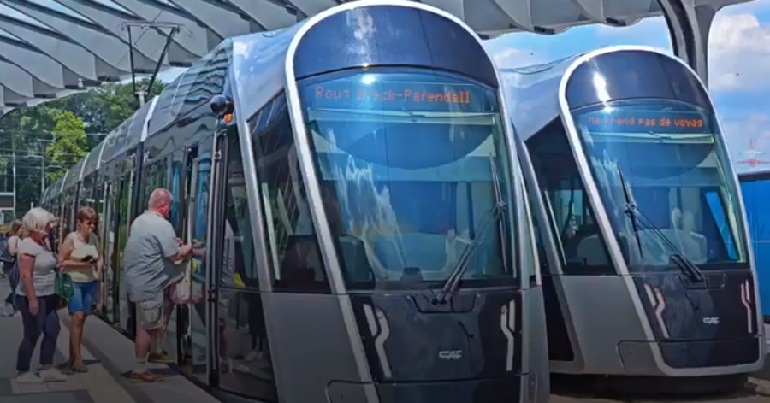 One of Europe’s smallest countries is leading the way in the fight against climate chaos. And it’s putting its larger neighbours to shame in the process.

The plan is simple – make all public transport free.

Luxembourg’s left-leaning coalition government plans to end fares on public buses, trains, and trams. The country will become the first in the world to do this.

In spite of its size, the Guardian reports that Luxembourg’s capital city actually “suffers from some of the worst traffic congestion in the world”. So while lifting public transport fares will help to reduce greenhouse gas emissions from cars and make it easier for poorer people to get around, the hope is that the move will also help to reduce congestion in the city.

It won’t be an easy task, of course. There’s the question, as Delano reports, of cross-border trains, for example, and then how to pay for it all. So the government understands that it won’t happen overnight. But the commitment is there. And it’s a policy that’s already attracting attention from around the world.

This will be the first country in the world with free public transport! 🚌#Luxembourg pic.twitter.com/ZuQH5fPZbU

Good news for once!

The EU member is home to the European Investment Bank, and it’s a founding member of NATO (though it’s the lowest-spending member). But the news the world normally hears the most about Luxembourg is that it’s one of the world’s “worst tax havens”. So positive international coverage will surely be welcome. And there’s no doubt that its latest move is putting its larger neighbours to shame.

Luxembourg’s decision makes a big change, for example, from the recent government actions in neighbouring France. There, as author and activist Naomi Klein has stated:

Neoliberal climate action passes on the costs to working people, offers them no better jobs or services + lets big polluters off the hook. People see it as a class war, because it is.

Change needs to come. Because to prevent the very worst effects of climate chaos, the world has to shift towards “healthier, more sustainable diets” (which rely less on the highly polluting meat industry) while moving away from fossil fuels and towards sustainable energy. That much is clear. But the question is: ‘who will bear the brunt of those necessary changes – the richest citizens, or the poorest citizens?’ And it seems the approaches of Luxembourg and France couldn’t be more different. One makes life easier for ordinary people; the other makes it harder.

With its latest move, then, one of Europe’s smallest nations has shown one of its biggest how to move into the future with dignity, justice, and compassion. And that’s a beautiful sight to see.