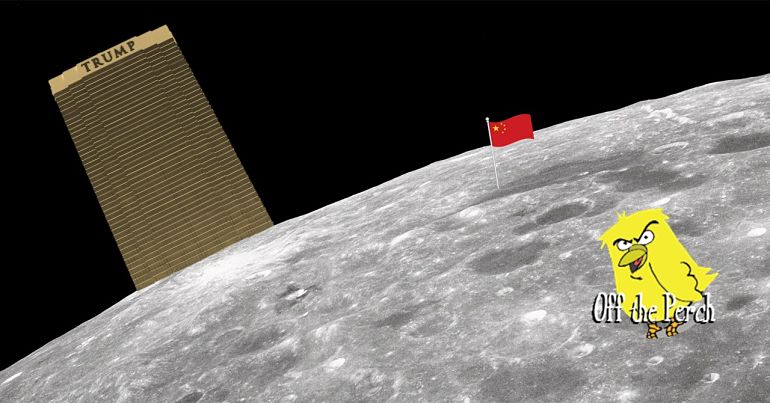 Following news that China has landed a spacecraft on the far side of the moon, Donald Trump is reportedly making plans to build a factory there. If all goes according to plan, the plant could be cranking out ‘Trump 20’ tat by the end of the year.

Off The Perch met a Trump aide in a gap behind some bushes in the White House garden. Unfortunately, a rather dishevelled-looking Sean Spicer was also in there, but he didn’t bother us too much. The aide, Terry Chestnuts, explained the move into the extra-terrestrial property market:

The Donald obviously isn’t running his businesses while he’s POTUS, thanks to the rules, but he sometimes passes messages to friends of friends and various relatives to make sure things tick over. He’s been wondering for a while how to get his 2020 merchandise produced at a decent price. The last lot was made here in the States but that’s getting harder now we’ve cracked down on the illegals. We might have to go back to using China.

Chestnuts had a quick look left and right, then continued:

But The Donald knows, because he’s a smart guy, that making product actually in China could hit him at the polls. Hell, he could even lose. So he had to think clever. Here’s what he told me: ‘So China is on the moon. They’ve done it. They’ve gone to the dark side [he meant far side] of the moon before anyone else. Even before the USA. They’re bad people. But they’re clever people. And clever people know you have to keep things quiet. You have to not be seen. The dark side is perfect. You can do whatever you want there. The regulators aren’t there. No one is there. No one is saying you can’t do this and you can’t do that. The regulators there can’t even say it’s climate change.’ And then he laughed for ten minutes.

When he’d recovered, he said: ‘I’m going to build a factory there. I’m going to speak to some good people I know in China and we’re going to do this. It’s going to be great. There’s no gravity. We can build tall. Let’s make it gold so it shines some light on that dark side. The small gravity will make shipping cheap. You can’t charge big shipping for something that weighs nothing.

By this stage, we thought it might even be worth seeing if Spicer had something to say that would be less ridiculous. But then we remembered everything he’d ever said.