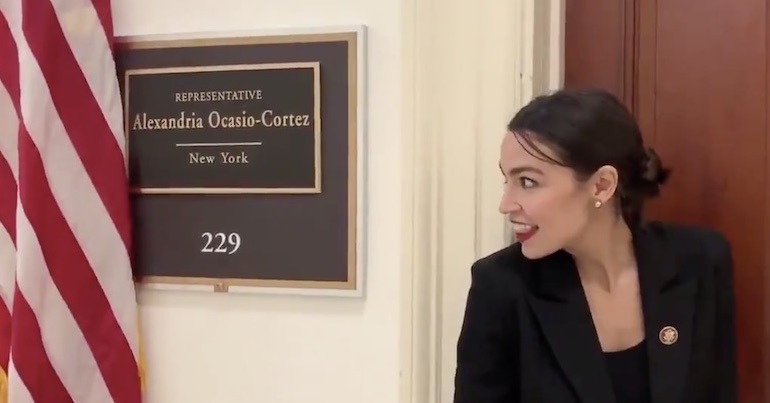 Just hours after Alexandria Ocasio-Cortez was sworn into Congress, right-wing establishment trolls struck. Presumably thinking they’d dent her glory as the youngest woman ever to be elected to the US House of Representatives, they tweeted a video of her dancing at Boston University. But Ocasio-Cortez showed them the new way of politics with a perfect response.

On 2 January, a now-deleted tweet said: “Here is America’s favorite commie know-it-all acting like a clueless nitwit she is… High School video of ‘Sandy’ Ocasio-Cortez.” alongside a video of Ocasio-Cortez dancing when she was a student. But if this was an attempt to take her down, it backfired. Badly.

It didn’t take long for a Twitter page called AOC Dances To Every Song to appear. But it didn’t mock her; it was a sheer celebration that mocked the right-wing establishment trolls, and it currently has over 16,000 followers.

It didn’t take long for Ocasio-Cortez to, quite simply, shut the trolls down:

Asked @AOC re this dancing video. She said:

"It is not normal for elected officials to have a reputation for dancing well and I'm happy to be one."

& "It is unsurprising to me that Republicans would think having fun should be disqualifying or illegal"https://t.co/M0qMKmQ0ar

And on 4 January, she took it to the next level and posted a video herself, dancing into her new office:

I hear the GOP thinks women dancing are scandalous.

Wait till they find out Congresswomen dance too! 💃🏽

Have a great weekend everyone 🙂 pic.twitter.com/9y6ALOw4F6

But behind the dancing is the ever powerful reminder of the politics Ocasio-Cortez stands for. She’s not afraid to take down the old school Democrats. AsThe Canary reported in November 2018, she joined progressive, anti-corporate funding groups to protest against Democrat house leader Nancy Pelosi’s office. She’s a socialist, a genuine progressive, and a true advocate for equality and a new way of doing politics:

Sometimes we take for granted exactly how radical ideas like Social Security, the VA, and public schooling really are: that we will care for our elders, provide healthcare, and educate *all* children in America free of cost at the point of service. https://t.co/thqD1u8VfY

Ocasio-Cortez was elected during midterms that dramatically changed the traditional face of US politics. As Vox reported, Congress:

now has a record-breaking number of women, people of color, and LGBTQ representatives — and they’ve already begun to shake things up. Because so many of the new House members are mothers with small children, for example, the Capitol is now adding baby-changing tables in the members-only bathrooms and considering possible changes to its working hours.

Because the November elections saw:

Meanwhile, 28 women in the new Congress are mothers of young children, and one baby has already been present during votes.

Ocasio-Cortez has also pointed out that many of these women are powerfully aware of the historic battle for women to gain political freedom and make their voices heard:

I wore all-white today to honor the women who paved the path before me, and for all the women yet to come.

From suffragettes to Shirley Chisholm, I wouldn’t be here if it wasn’t for the mothers of the movement. ⬇️ https://t.co/GBfSSYxbek

Given Donald Trump’s racist, sexist, and increasingly dangerous politics, it’s clear why the US electorate voted for change. The younger, diverse wave of newly elected politicians are a breath of fresh air after the old white men who’ve dominated US politics for too long. And dancing them into the future is Ocasio-Cortez, who truly is on point.