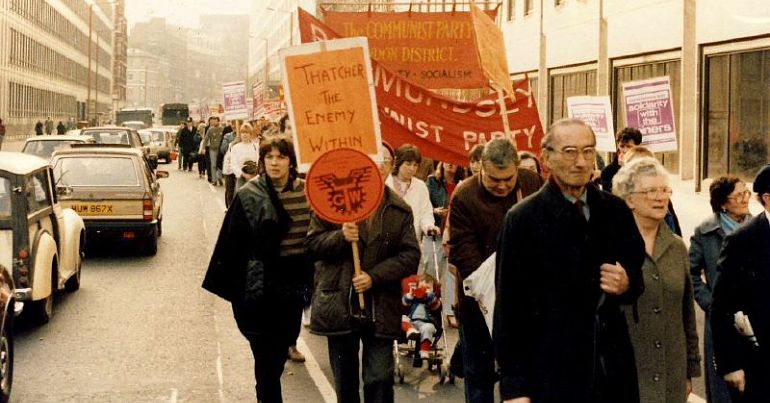 Scottish Labour MSP Neil Findlay has called for an independent review of the miners’ strike to consider issuing pardons to miners. The Scottish government announced the review at Holyrood last year. As reported by the National, former justice secretary Michael Matheson told MSPs the government would “do what it can to do right by those affected by the dispute”.

But Scottish Labour now says that the inquiry should consider pardoning miners convicted during the strike.

Striking miners took industrial action against pit owners and Margaret Thatcher’s government. They were attempting to prevent coal pit closures between 1984 and 1985. The arrests followed police violence and clashes with the miners.

“Power of the state to crush working people”

An estimated 500 miners were arrested in Scotland. Many were made redundant after their arrest.

Scottish Labour said that 30% of those dismissed because of arrests during the strike were Scottish; a disproportionate number.

Mining communities across Britain suffered at the hands of politicised and often brutal policing as Margaret Thatcher and her Tory government used the power of the state to crush working people. Scottish miners suffered disproportionately from these underhand tactics during this struggle. Many of these workers lost not just their jobs and income, but their relationships, their homes, and many their mental and physical health.

Some were blacklisted and others went to their graves the victims of a miscarriage of justice with a criminal conviction against their name when the reality was they had done nothing wrong. The review of these convictions should consider pardons, and ensure that politicised convictions are thrown into the dustbin of history where they belong.

“Scotland is leading the way”

According to STV News, a spokesperson for the Scottish government responded:

Scotland is leading the way in ensuring that the experiences of those affected are properly heard and understood.The Scottish Government understands that strong feelings persist in Scotland about the events of 1984/85, especially in mining communities.While it is not within the scope of the independent review to re-examine individual convictions, it is hoped it will bring openness and an element of closure to all of those who have been impacted.

Clearly, we will await the findings of the independent review before considering what, if any, further actions are appropriate.

Although the miners’ strike took place over 30 years ago, I am aware that strong feelings about it persist in Scotland, especially in mining communities. If you were a miner, part of a mining community, a police officer or in some other way affected by, or involved in, the strike, please let us know about your experience.