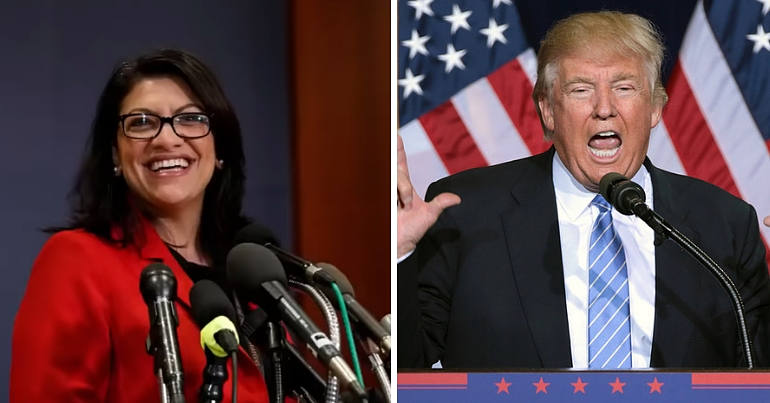 A new Democratic congresswoman just called Donald Trump a “motherfucker”. The reaction? Predictable outrage from Trump and Republicans – delight from women all over the US.

Rashida Tlaib is the first Palestinian American to be elected to Congress. At an event for her supporters on 3 January, she recounted a conversation with her young son:

When your son looks at you and said ‘Mamma, look, you won — bullies don’t win.’ And I said, ‘Baby they don’t, because we’re gonna go in there and we’re gonna impeach the motherfucker!

The idea went down well:

“We’re going to go in and impeach the motherfucker” pic.twitter.com/oQJYqR78IA

Predictably, Trump himself was less impressed. At a news conference, he said:

He added that her comments were “disrespectful to the United States of America.”

Trump himself is notorious not just for using bad language but language and gestures that are misogynistic, racist, and ableist. In 2005, he was recorded saying that when he sees beautiful women he likes to “grab them by the pussy”. He later described this comment as just “locker-room banter”.

Trump may not have liked Tlaib’s comments, but women all over the US took to Twitter in delight:

Impossible to know if vow to impeach the motherfucker will turn out to factually correct, but it's certainly imaginatively correct. I therefore give it zero Pinocchios & a million dancing-women emojis on my scale of hilariously true things that women are finally saying out loud.

I thought her comments were disgraceful; she dishonored herself and dishonored her family; it was highly disrespectful to the United States says the man who said 'grab em by the p___'
cc @RashidaTlaib

So we can "grab them [women] by the pussies", but we can't "impeach the motherfucker?"

America can fuck right off.

It's peak Trumpster to get in a HIGH DUDGEON over a Rep. Tlaib saying "We're gonna impeach the motherfucker" but not give a single drip of shit about any of the things Trump has done to warrant his impeachment.

She should’ve said “grab them by the pussy.” Or perhaps “moved on her like a bitch.”

You know—civil language befitting the solemnity of the office.

Congresswoman Tlaib was elected to shake up Washington, not continue the status quo. Donald Trump is completely unfit to serve as President.

Most diverse Congress in history

Ilhan Omar, the first Somali American congresswoman, who arrived in the US as a refugee, tweeted:

The #116thCongress has SO much to be proud of:

Trump had better watch out. There are a lot of women in congress now, and elsewhere, who are not afraid to speak out.