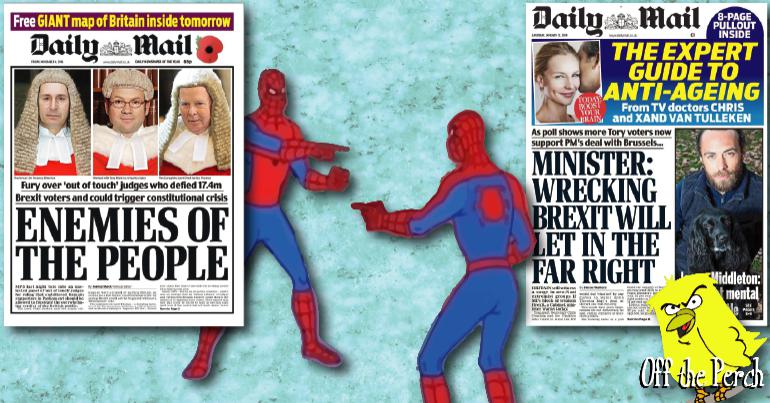 Chris Grayling – a.k.a. ‘that useless, creepy transport wanker’ – has warned that blocking Brexit will fuel a rise in the far right. The Daily Mail has amplified this message, which is somewhat confusing, because… err… don’t you guys usually like encouraging the far right?

The British tabloids haven’t shied away from calling for migrants to be taken out with gunships, or from labelling the judiciary as ‘enemies of the people’. Despite this, a spokesperson for the Coordinated Union of Nationalistic Tabloids told us:

There’s no evidence to suggest that scapegoating a minority group can lead to fascism. Especially not when it’s combined with a campaign to delegitimise the judiciary. There are certainly no examples of such a thing happening in history.

When we showed him an example, he snatched the paper from our hands and ate it. We told him we’d made copies, but he just smiled and said “I skipped breakfast this morning especially”.

So, why are the people who stoked the far right with xenophobia and austerity suddenly worried about the rising far right?

Well, there are two options.

The first is they’ve seen the error of their ways. This is unlikely, as it would involve Tories and tabloids experiencing things like ‘shame’ and ‘introspection’.

The other option – the most likely – is that they’re actually not bothered, and they’ll just say anything to get their own way – no matter how ridiculous they know it sounds.