After losing record-breaking vote, PM vows to lose the next one on a pogo stick - Canary 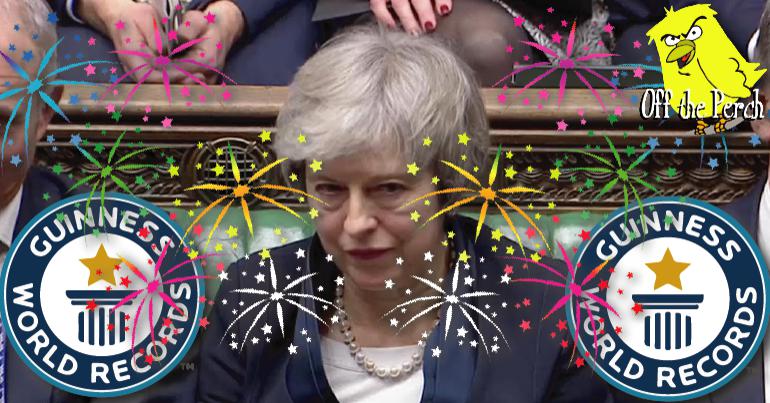 On 15 January, Theresa May suffered the largest ever government loss in the Commons, and the biggest Tory rebellion of the modern era. So what’s left for her now?

Well, according to the woman herself:

I can’t be the best PM in history, but I can sure as heck be the worst! Let’s keep these records coming! Woo!

May admits she may not be able to lose bigger than last night, but she does have a few other ideas:

How about I lose the next vote on a pogo stick? And while I’m on the pogo stick, I’m juggling Brexit impact assessments? And as I’m juggling, I’m downing 2 litre bottles of fizzy pop?

A spokesperson from Guinness had something to say about this:

It’s really just overkill at this point. She’s already going in the next World Record Book as the worst PM in living memory. The only reason she’s not worst overall is because of what Cavendish did to those poor otters.

Not one to give up on a stupid idea, May has said she aims to replace Cavendish. David Cameron, meanwhile, has said he doesn’t regret calling the referendum – even in light of May’s plan to re-invade Iraq on a space hopper.