May has survived. The establishment are so scared of an election they'd rather push the UK over a cliff. - Canary 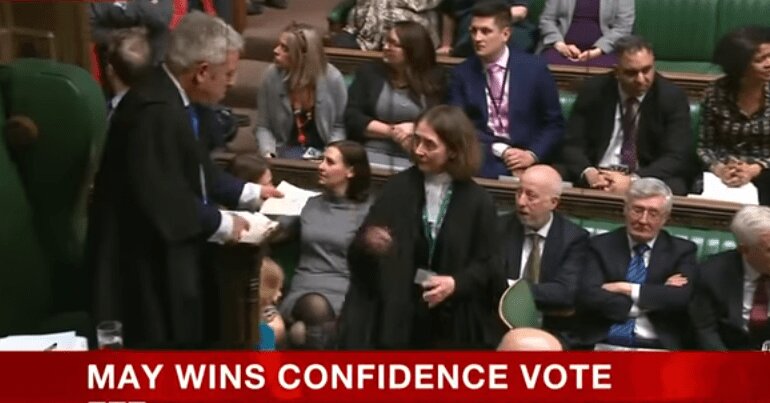 Theresa May lost the vote on her Brexit deal – the very purpose of her government – by the biggest margin in history. Still, the Conservatives and the mainstream media have closed ranks around her, enabling her to survive both the political pressure and a no-confidence vote. With the UK in uncharted territory, it seems the establishment are so scared of an election that they’re prepared to push the UK over a cliff.

There are many reasons why the global political and economic establishment is terrified of Corbyn’s transformational programme. The UK has a permanent seat on the UN security council and is home to powerful multinational corporations and a top global finance industry. Also, Britain’s overseas territories are the world’s largest network of tax havens. The idea that a genuine internationalist progressive could be UK prime minister is unacceptable to the majority of ruling institutions.

We need a general election

A general election is the only way forward. Because a second referendum risks illegitimacy in the eyes of millions of Leave voters and the Conservative leadership, which would remain in power without an election. There are also practical problems, because the official process of a referendum takes over five months.

By contrast, a general election takes around six weeks and can solve the parliamentary deadlock. The main problem since 2017 is that the Conservative government has no majority. So there simply isn’t a consensus on any Brexit path. That is part of the reason May’s deal is so terrible: it’s a balancing act between the different factions in parliament (along with her own red lines).

On top of that, May’s plan – which was never going to pass – has sidelined matters of life or death for over 30 months (such as the looming climate catastrophe and devastating austerity).

The historic defeat of May’s deal was itself an expression of no confidence in the only Brexit option the prime minister is able to offer. The only way to make progress is through a general election.