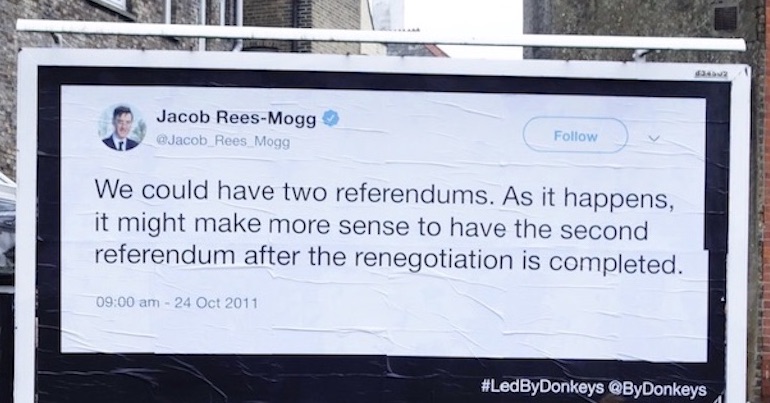 An ingenious project by a group called ‘Led By Donkeys‘ has turned Tory tweets about Brexit into massive billboards. The Tories’ Brexit lies are coming back to haunt them. And it’s just brilliant.

As the Twitter site says, the project takes “Brexit predictions of our leaders, rendered as massive billboards”. A Led By Donkeys spokesperson told The Canary that it’s a “public information campaign to remind the public of the statements and promises made to us by our MPs”. As Led By Donkeys explained:

The news cycle is so fast nowadays, we forget what our leaders once said. If they want us to trust their judgment as we enter the choppy waters of Brexit it’s right that we remind ourselves of their record.

The first billboard went up on 9 January. It was a poignant reminder of David Cameron’s words in 2015:

Last night we started a little project to record for posterity the prophetic words of our leaders. Here’s the first one (Manor Rd / A10 in London). Eyes peeled for more #LedByDonkeys #TweetsYouCantDelete @David_Cameron @Ed_Miliband pic.twitter.com/9ED5MUPTTn

Led By Donkeys told The Canary:

The idea came down the pub. We were talking about whether Cameron would one day delete his ‘chaos with Ed Miliband’ tweet, and someone said: ‘Let’s turn it into a tweet you can’t delete.’ It went from there.

The next MP to get this special treatment was former Brexit secretary David Davis. In 2016, Davis promised there’d be “no downside to Brexit”:

Day two of a project to turn the predictions of our Brexit overlords into #TweetsYouCantDelete. You asked for @DavidDavisMP, we give you @DavidDavisMP. Vote in thread below for next poster – location will be a leave-voting town. (Source for DD quote: Hansard) #LedByDonkeys pic.twitter.com/5dVYMy5EKS

By asking Twitter users whom to feature next, the project keeps growing:

We’re turning the past pronouncements of our Brexit leaders into giant billboards. Number 3 is Michael Gove in Romford, Essex. Follow us for more this week! We are a nation #LedByDonkeys pic.twitter.com/Ls6dYFp3lr

In the 2016 referendum, 62.2% of people in Dover voted Leave. On the 16 January, Led By Donkeys covered Dover in billboards:

A busy night on the Brexit frontline. We’ve covered Dover in the historic quotes of the people responsible for this chaos. Britain is a nation #LedByDonkeys.

The people behind Led By Donkeys have chosen to remain anonymous. No one’s funding them, but now “loads of people” have asked to contribute. They may set up a crowdfunder, but they “haven’t got our act together” to do this yet. They have got 17,900 Twitter followers, though, and their plans to expose the “Brexit bullshit artists” keep growing:

Let’s expose the Brexit bullshit artists in front of as many people as possible. Can we get more followers than Prime Minister wannabe @DominicRaab?

Although there’s a funny side to this, the truth is it’s a poignant reminder of the total political chaos the UK faces. As MPs voted against Theresa May’s Brexit deal on 15 January in record numbers, we’ve now got a government that’s seen the biggest defeat ever in the UK’s history. Yet those same MPs also kept May in power the following day in a no-confidence vote against this chaotic government.

What happens next remains unclear. So, in the meantime, please keep up the great work, Led By Donkeys, because it reminds everyone how little trust the Tories deserve.

Featured image via Led By Donkeys