The BBC ignored an anti-Tory protest live on air - Canary 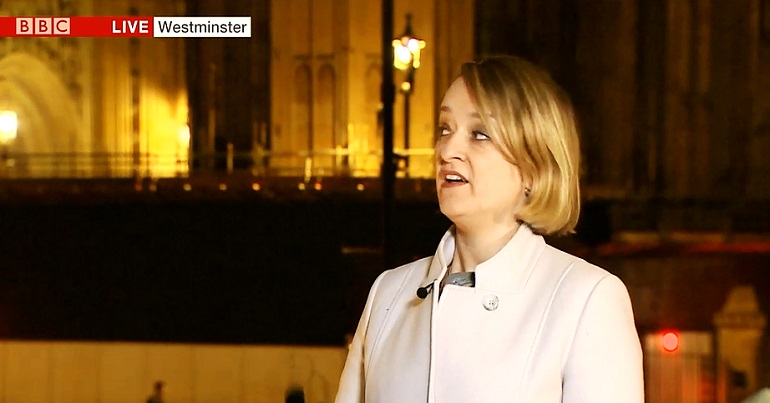 Despite being metres away from it, the BBC managed to ignore an anti-austerity, anti-Tory protest. But viewers of the BBC News at Six news couldn’t miss it.

Campaign group Unite the Resistance organised a flash demo outside parliament on Wednesday 16 January. It took place while Labour’s no-confidence motion debate was taking place. The demo was to raise awareness of what Conservative-led governments have done since 2010. But it was also calling for a general election:

After May’s crushing defeat in Parliament…

Protest this evening to say “May Out! Tories Out! General Election Now” 5.30pm Parliament Square.#GeneralElectionNow https://t.co/eeM9qmG02W…

Disability rights campaigner Paula Peters was one of the speakers at the demo. For BBC anchor Sophie Raworth and political editor Laura Kuenssberg, Peter’s rousing speech over a megaphone must have been quite a distraction. But it meant that anyone watching News at Six would have heard her.

In front of the domestic and world media, and while everyone is debating and focusing on Brexit, we had an opportunity to say how the austerity agenda of the last eight years continues regardless, and its impact on us.

That disabled people are dying due to social care and benefit cuts, having human rights violated as ruled by the UN. Also that the UK public needs to see how bad Theresa May’s government is. The world needs to know the tragic impact of austerity on disabled people.

As The Canary‘s John Shafthauer recently reported, the impact of over eight years of Conservative-led rule has been devastating. As Peters noted, a report by a UN committee highlighted some of its effects on sick and disabled people. It accused successive governments of “grave” and “systematic” violations of disabled people’s human rights. This was due to welfare changes and cuts. The committee went on to say governments had created a “human catastrophe” for disabled people.

In the midst of eight years of chaos have been the mainstream media. So Peters had a few words for them, too:

The mainstream media needs to be held to account alongside this heinous government for spreading the horrific government propaganda that has led to ever increasing division in our communities and ramping up the hostile environment. We are subjected to this to on a daily basis, which Brexit has added to.

While Brexit has added to the division and hostile environment in the UK, it was here before that. Sick and disabled people dying; cuts to public services; homelessness rocketing – all of that is in spite of Brexit. As one Twitter user pointed out:

But with Labour’s no-confidence motion failing, what hope for a general election now? As Peters previously tweeted:

A message to the people: your NHS welfare State your services. Don’t rely on confidence votes. Rise Up. Take to the streets in your communities villages towns and cities. We the people need to get the Tory Government out! Now We have no more time to waste.

I ended my speech outside parliament with a message to the UK. It’s your welfare state. Your human rights. So, join a campaign. Get active. Build the resistance and get the Tory Government out. Grab your banner. Get your megaphone. Let your voices be heard. We need to continue to get the truth out there about this government’s austerity agenda and the impact of it.

Indeed. Amid the sideshow of Brexit, the reality is that, regardless of the outcome, the Tories’ nefarious agenda will continue. Leaving the EU may make things worse, but looking at the past eight years, staying in won’t make them any better. Brexit is happening. So it’s time to concentrate on what’s more important: getting the Tories out. Then reforming our broken democracy for good.