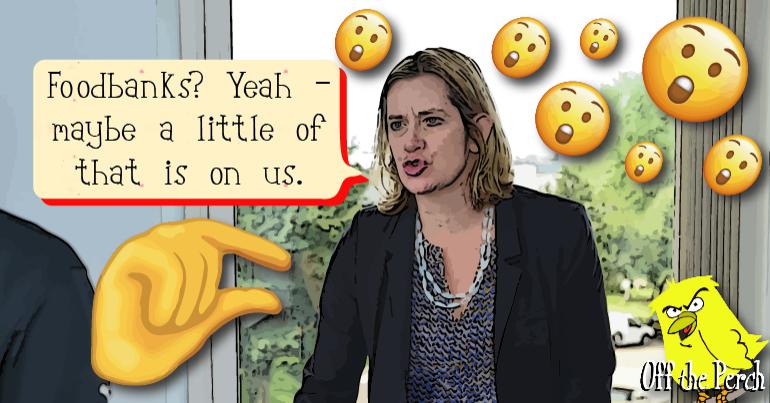 Britons are shocked today, because a Tory has finally admitted to doing something wrong. Amber Rudd conceded that Universal Credit might have increased foodbank use. Before you get too excited, however, it’s worth pointing out two things:

Off The Perch caught up with the Department for Work and Pensions (DWP) boss, Amber Rudd, to ask more:

OTP: So you’ve admitted to something that everyone already knew.

OTP: Yeah… that’s not really what we’re saying. Although we are wondering if you’ll also admit to all the other things the DWP is doing wrong?

OTP: Ha ha. No. We’re talking about the sanctions regime; the fit-to-work fiasco; the ‘grave’ and ‘systematic’ violations of disabled people’s human rights.

AR: Ah, you’re talking about the UN reports? Those reports were all a bit political, I’m afraid.

OTP: Well, I mean, yeah… it’s a political operation; you’re a political party; the result of your actions is politics.

AR: No, I mean it was political in a biased way.

OTP: You mean it gave more weight to disabled people’s rights than your right to systematically abuse them?

AR: Well, I wouldn’t phrase it like that, but basically, yes. I don’t really know what the UN’s problem is. The British media is generally pretty balanced on these issues.

OTP: They are in the sense you mean, yes. I wonder if that’s why you’re admitting to the increased foodbank use – confessing to the most outwardly obvious issue to distract from the underlying horror beneath?

AR: For the last time, there is no underlying horror at the DWP!

OTP: Oh really? So how come you smell of sulphur since you took the job?

AR: It’s an… experimental deodorant. Now if you’ll excuse me, I need to go and change people’s lives.

OTP: For the better?

Rudd left without answering the final question. Despite her earlier claims to the contrary, she exited via some sort of hell-mouth that opened beneath her. She later denied it being a ‘hell-mouth’ – referring to it as an ‘ordinary mouth’.