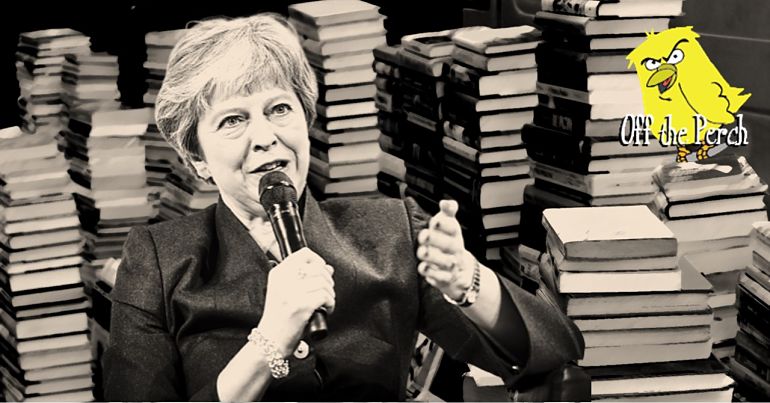 The end of a prime minister’s reign is always an exciting time in the world of publishing. There’s a bidding war to secure the memoir rights, TV chat shows queue up to offer a place on their sofas, and plans begin for lucrative speaking tours.

Industry watchers expected Theresa May’s announcement that she ‘might’ be standing down to fire the starting gun for the usual mad race. But nothing’s happened.

So far, there hasn’t been a murmur from any of the major players. It’s been left to third-rate vanity publishers Goastwright & Cashin (G&C) to offer May a deal. G&C’s head of public relations, Letitia Febreze, explains:

We specialise in books that wouldn’t ordinarily get a deal from one of the more mainstream publishers. We also do a certain amount of work with writers who, frankly, can’t write. For a competitive fee, we’ll put together a book with the person’s name on the front and run off anywhere from 100 to 50,000 copies. We expect Theresa will want wide coverage, window displays in Waterstones etc. So it’ll be towards the top end of our range.

But Febreze explained that G&C expects to shift barely a fraction of the total print run. As a result, she said:

We’ve already booked capacity at the pulping plant. You have to draw up these plans in good time. Our parent company makes toilet roll, so it should be a win-win.

Ken Chisel, from the Institute of Criticism, was as scathing as ever:

A good political memoir should be a mixture of gripping whodunnit and scandalous kiss-and-tell. It’s absolutely clear that May’s will be neither. She’s unlikely to say, and it’s possible she doesn’t even know, who actually did anything that happened during her entire political career. And she’s already revealed that the naughtiest thing she ever did was to run through a wheat field. So this book is hardly going to be a page-turner. In fact, I wouldn’t be entirely surprised if it’s just the phrase ‘nothing has changed’ repeated 20,000 times. As for going to hear her deliver an after-dinner speech, well obviously not.