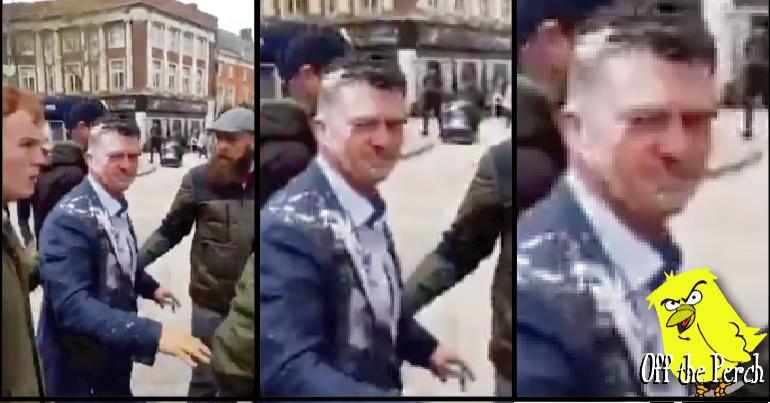 For the second time in as many days, Stephen Yaxley Lennon -aka Tommy Robinson – has had a milkshake thrown at him. The second one hit. But it did more than just that. It brought together a fractured nation, as people looked at the tiny, milk-covered bigot and thought:

Yes. This is it. This is the British culture UKIP says doesn’t exist anymore.

As such, ‘milkshaking the fash’ is set to become the new national pastime.

How was my man so casual 😂

🎶 Tommy Robinson's milkshake brings all the boys to the yard 🎶 pic.twitter.com/M1sYUyp02w

Several fast food chains are now offering a discount on milkshakes. As said chains are themselves quite terrible, this is probably more of a marketing ploy than anything.

Some people worried that tossing thick beverages at thick bigots makes you as bad as the fascists. And this might be true. Because who could forget when the Nazis lined their enemies up and subjected them to mild humiliation by milkshake? No one, that’s who.

Commentators predict the custom could eventually become the new Guy Fawkes night. In the future, children will toss milkshakes at angry dolls to remember when bigots roamed the nation.

Hopefully, that fash-free future comes sooner rather than later.