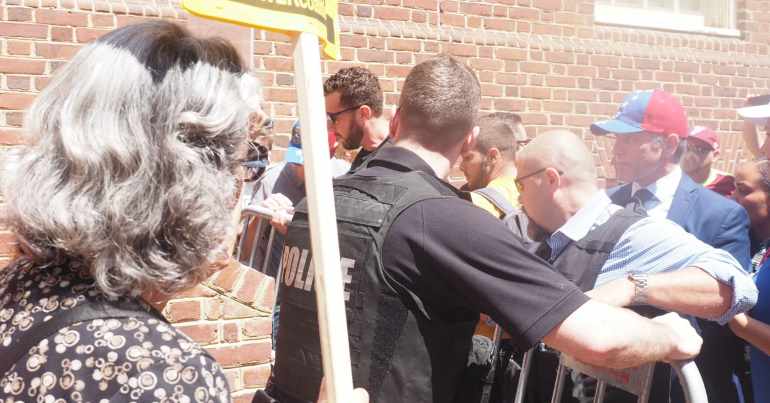 As the coup attempts in Venezuela rage on, a battle over the country’s embassy in Washington has been raging too. As The Canary previously reported, a group of activists called the ‘Embassy Protection Collective’ have been living in the embassy as guests. Their aim is to keep it out of the hands of opposition leader Juan Guaidó’s self-proclaimed shadow government. Pro-Guaidó protesters, meanwhile, have been demonstrating in support of seizing the embassy. And now, things have turned ugly, with these protesters facing off with the embassy protectors – resulting in violence and multiple arrests.

At the same time, there have been reports of authorities preventing food from getting into the embassy.

CODEPINK tried to hold a press conference to discuss developments with gathered reporters. But pro-coup protesters disrupted them with the sirens of their bullhorns. They refused repeated requests to turn them off. As the press conference broke down, both groups headed for the rear entrance of the embassy to chant rival slogans. Pro-coup forces blocked both the front and rear entrances.

The Canary was on the ground as events unfolded.

Opposition activists have prevented @ArielElyseGold from entering Venezuela’s embassy to deliver supplies to the building’s protectors.

We are out of food on the inside, and the opposition has stated their intention to starve out the collective. pic.twitter.com/fKFuBFSp3u

Secret Service have now arrested @ArielElyseGold for attempting to throw food up to members of the embassy protection collective, who are out of supplies. pic.twitter.com/XvYNmNGCwb

Kei Pritzker says its “ironic” the opposition is using the same tactics against embassy protectors in DC that Washington uses against Venezuela: a siege designed to starve out the people so they admit defeat.

But “our resolve is strong. We stand with the Venezuelan people.” pic.twitter.com/FC5UlBdCel

Pattern of verbal and physical attacks

The Canary recorded at least one incident of a CODEPINK member being verbally abused with sexist language. A pro-coup protester said to a female member: “You should be ashamed of yourself you fucking little bitch”:

This is not the first incident of such behavior. MintPress News has also reported incidents of pro-coup protesters both physically assaulting and hurling racist and homophobic slurs at anti-coup activists.

The previous day had also seen a tense face-off between pro- and anti-coup protesters. On the evening of 1 May, Guaidó’s shadow ‘ambassador’ to the US, Carlos Vecchio, had attempted to seize the building. But he was unable to enter. Washington’s Secret Service police did not take decisive action to let him in. His planned victory speech, meanwhile, was drowned out by anti-coup activists’ chants from both within and outside the embassy. Journalist Max Blumenthal described the attempt as “a humiliating defeat for a US-backed opposition that has not achieved a single concrete victory since launching its coup attempt over 75 days ago.” The day before that, a Guaidó supporter had gained access to the building and ransacked one of its rooms. Authorities later removed him.