Trump clarifies what 'table' the NHS will be on - Canary 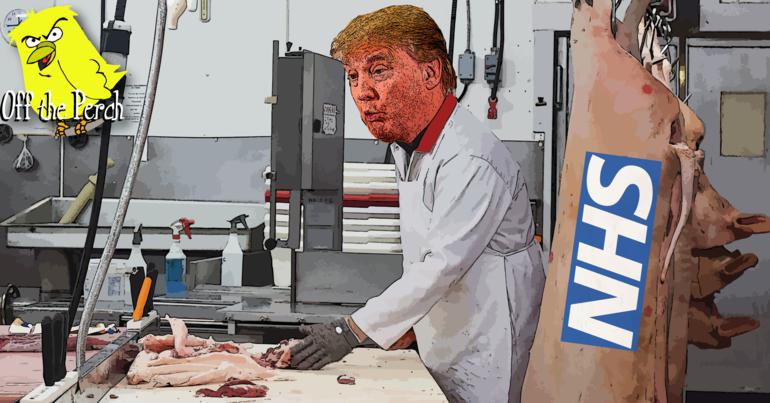 When you’re dealing with trade everything is on the table, so the NHS or anything else, or a lot more than that.

But what ‘table’ did he mean? As it turns out, he meant the butcher’s table. The same one he’s been using to carve up America these past few years.

As Trump himself explained:

There’s an art to making deals – a finesse. I don’t like that. If you ask me, the smart guys go in with a meat cleaver and cut off the bits that they like. We’re talking about the steaks; the loins; the McNuggets. You understand? Nigel Farage tells me you bozos would be happy with the gristle, which makes me think I should probably take that, too.

Trump has since rowed back on these comments. His latest stance is:

We’re going to give you a truly good deal. It’s just a shame your fake news media reported otherwise. That forty-minute video of me waving a knife at some doctors and telling them their meat belongs to me now – totally fake! You people treat me so unfairly. You’re lucky I don’t hold grudges.

With soft Brexit a distant memory and butcher-boy Trump slavering over the NHS, it’s looking like the options for Britain are increasingly Cleave or Remain. Going off the past few years, I’d probably prepare for the wurst.