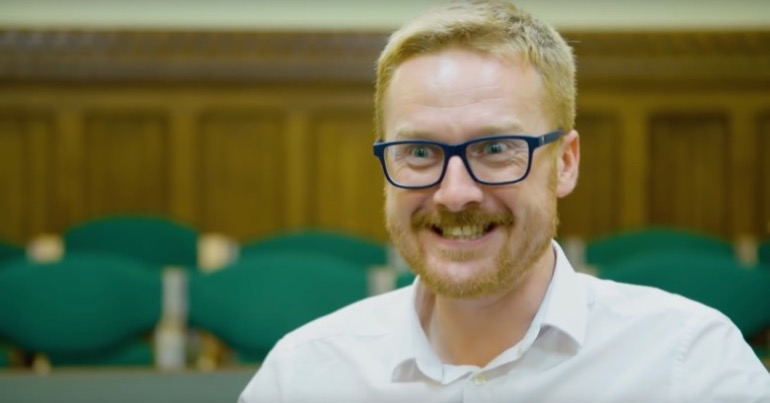 A frenzied day in parliament on 10 December ended with a heroic act of defiance by Labour MP Lloyd Russell-Moyle.

Yesterday, the cowardly Theresa May spectacularly U-turned on her commitment to a vote on her Brexit deal; notably because she’d lose.

Instead of allowing MPs to decide whether to allow this delay to her promised vote, May’s government instead stopped it unilaterally. The vote could now be postponed until as late as 21 January.

The government warned by the speaker

Most surprisingly, the government was warned by the speaker, John Bercow, that it would be “discourteous” to behave in such a manner:

Which Another Angry Voice translated perfectly from civil Englishness:

John Bercow states that Theresa May scrapping the #BrexitVote after 164 MPs have already contributed to the debate will be thought by many members of the House to be 'deeply discourteous'.

What a fantastically understated British way of saying "what a dick move"!

And journalist Robert Peston summed up the stupidity of the whole UK system perfectly:

Under the UK's magnificent unwritten constitution, all the government has to do to shelve this historic vote on our Brexit future – painstakingly negotiated and plotted for more than 18 months – is for the chief whip to shout "tomorrow" at around 8 tonight. Mother of parliaments

But thankfully, Corbyn managed to secure an emergency debate for 11 December on the government’s decision to pull the vote:

Jeremy Corbyn secures an emergency debate on Theresa May's abandonment of the vote on her failed Brexit deal. May is running scared and Labour are running the show ✊🌹 pic.twitter.com/PNzsN1lAhz

Lloyd Russell-Moyle sat in a full chamber of furious MPs to watch this farce unfold. Earlier in the day, he had voiced his brewing frustration:

When the PM doesn’t allow a vote of the people on the Europe deal, now she won’t even allow a vote of parliament or give us a date as to when we get a vote. The only option is to heckle this shower of a government that can’t negotiate their way outa a paper bag. 🤬😤 https://t.co/BVMH0gHbQL

And when given a chance to speak, he didn’t mince his words:

Lloyd Russell-Moyle's intervention questioning the believability of any promises given by the leader of the house, Andrea Leadsom. pic.twitter.com/3y60nWAB4x

But when the government finally used the “discourteous” mechanism to stop a vote, Russell-Moyle had seen enough and took drastic action:

He removed the symbolic mace, without which debate cannot continue.

For violating this sacred cow of parliament, Russell-Moyle had the mace confiscated by the deputy Serjeant-at-Arms:

Here is the footage of Lloyd Russell-Moyle grabbing the mace from another angle. He is confronted by the Deputy Serjeant-at-Arms as he attempts to leave the chamber with it #BrexitVote #BrexitShambles pic.twitter.com/m8xoJzKztU

He was also then expelled by Bercow for the remainder of the day and escorted off the premises:

NEW. Speaking to the Mirror Lloyd Russell Moyle said he was escorted off the Parliamentary estate personally by Commons authorities before withdrawing to a local pub. One official told him: "We do advise you don't bring parliament into disrepute any more, Mr Russell-Moyle". https://t.co/u1nDiw0Awd

Why did he do it? Russell-Moyle in his own words

But Russell-Moyle was defiant about his actions.

Thankfully they haven’t locked me in the Tower of London but if they had I’d expect May to be in the cell next to me for her treatment of Parliament today. I’m allowed back tomorrow after my symbolic protest against this government, wish May wasn’t allowed back. https://t.co/S51q5O9QEt

He then reportedly attended a local Westminster pub, where he was greeted as a hero:

Where does any self respecting MP go when he's been suspended for grabbing the Commons ceremonial Mace in a protest at Govt postponing Brexit vote?@lloyd_rm is in The Red Lion pub, hailed like a hero.
How very British.

I thought, one person is shouting ‘tomorrow’ and literally hundreds of people are shouting ‘today’, and the will of Parliament is going to be ignored.

The symbolic gesture of lifting the mace and removing it is that the will of Parliament to govern is no longer, it has been removed, and I felt Parliament had effectively given up its sovereign right to govern properly.

And more than that, this was about a more significant constitutional point in our failing democracy:

If we don’t sort out our constitutional settlement so that governments can’t do this in the future we do need to keep lodging these protests.

Varied reactions to his symbolic moment

The government has shown total contempt towards Parliament, democracy, voters, the whole shebang, and @lloyd_rm is a hero for taking direct action against it. https://t.co/RbLWn2Q2hl

Although some of our US cousins were confused by the incident:

I am an American who knows nothing about British politics. Is this a "he's the only one strong enough to lift it so he's now the King" situation?

Others recalled that a certain shadow chancellor once pulled a similar stunt when he was a backbencher:

Don't forget the MP for Hayes and Harlington (@johnmcdonnellMP) grabbed the mace in 2009https://t.co/dTU80lU6yQ

But others seemed less impressed by his actions. The BBC’s Laura Kuenssberg was one of them:

Goodness me – if you are in my nerd world this is a really, really big deal – like throwing your drink over all of your mates in the pub cos you don't like the tone of the conversation, and smashing all the glasses https://t.co/XEEEiG0hkw

Although perhaps Kuenssberg needs to step out of her “nerd world” for once and acknowledge a democratic outrage has taken place, instead of fixating on trivial formalities.

I’m in the Pub with @lloyd_rm and now worried I’ll be wearing a Fullers if I frustrate the will of the Pub https://t.co/MROGcq40el

Russell-Moyle recently showed he is brave and principled when he announced to parliament that he is HIV positive. And this latest incident proves how far his principles will drive him.

His actions remind us of the words of political activist Mario Savio:

There’s a time when the operation of the machine becomes so odious, makes you so sick at heart, that you can’t take part, you can’t even passively take part. And you’ve got to put your bodies upon the gears and upon the wheels, upon the levers, upon all the apparatus, and you’ve got to make it stop!

Russell-Moyle is one of a new generation of radical MPs unimpressed and unintimidated by the stuffy antiquated procedures of the British parliament, procedures that allow abuses of power by governments.

The video below sums up how he will be remembered by many of us: