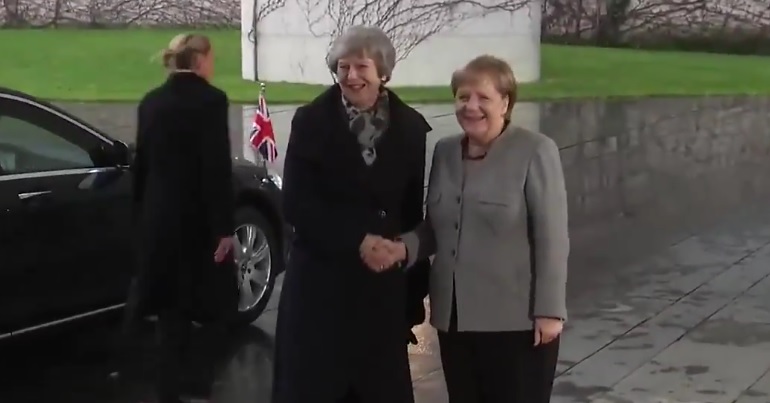 It’s official: the universe is now trolling Theresa May. That’s no longer in any doubt after the humiliating incident she had on her way to an EU meeting. In fact, it appears the universe isn’t just trolling May. No, it’s mocking parliament as a whole.

On 11 December, May was running around Europe trying to get “further assurances” from officials on her Brexit deal. She’s hoping that will save the deal from defeat in parliament when MPs vote on it. But May’s progress stalled at one point in her day, because of a car door:

As Sky News reported, when the UK prime minister arrived for talks with Angela Merkel, she was unable to get out of the car. This does not bode well, as people pointed out:

Can’t get out of the backseat, what hope the backstop?

Oh dear, as if it couldn’t get any worse! #MayBot now literally locked in.

Others thought the gaffe reflected on May overall, rather than purely on her negotiating skills:

They had to release the child locks.

This week can't get any more embarrassing.
May: Hold my beer.

Meanwhile, someone claimed that Merkel may have engineered the situation, to show May what a life without the EU will look like:

Merkel: "And this, By the way, is the freedom of movement you Brits are going to enjoy after Brexit."

It isn’t only May who’s having trouble standing tall in the face of adversity though. The night before the prime minister humiliated herself in Europe, the Evening Standard‘s political editor posted a picture of parliament’s Christmas tree on Twitter. It looks distinctly like it could keel over at any moment:

Even the House of Commons Christmas tree looks ready to collapse. pic.twitter.com/h5JNOvRUIj

The universe really does appear to be having a pertinent laugh at the expense of the UK political class. Well, that or Westminster is in such dire straits that everything the people in it touch – including car door handles – turns to shit.

What a very merry Christmas it’s going to be.