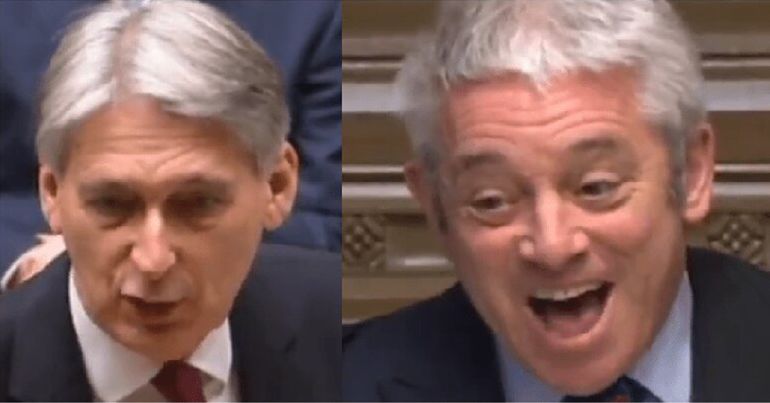 Conservative speaker John Bercow, who acts as a cross-party referee in the Commons, spontaneously shut down the chancellor for the government’s treatment of parliament.

In a historic first, MPs had already found Theresa May’s administration in contempt of parliament on 4 December. May had tried to override a binding parliamentary vote in order to hide her Brexit legal advice.

Then, the government simply cancelled the Commons vote on May’s Brexit deal just 12 minutes after Downing Street said it would go ahead, and after parliament had spent days debating the proposal.

Still, on 11 December, chancellor Philip Hammond was demanding his Labour counterpart John McDonnell “vote” through the deal – until Bercow felt forced to call him out:

"It's quite difficult to vote for something if there isn't a vote."

WATCH: John Bercow rebukes @PhilipHammondUK after he tells @johnmcdonnellMP to vote for the govt's deal. pic.twitter.com/NO4Hlq8AUj

There is a deal on the table that will end the uncertainty and allow this country to move on… all he has to do is get behind it, vote for the prime minister’s deal and we can all move on.

But then Bercow pointed out:

I’d just very gently say to the chancellor, to whom I’ve been listening with great care, it’s quite difficult to vote for something if there isn’t a vote. I’m only trying to help the right honourable gentleman, but it’s a point so blindingly obvious I’m surprised that I have to state it, but manifestly I do.

Bercow had already chastised the Conservative government for calling off the vote on 10 December. The speaker told the Commons that May’s administration is ignoring what he said was “in democratic terms the infinitely preferable way”, which was for MPs to vote on whether the matter should be postponed.

Halting the debate after no fewer than 164 colleagues have taken the trouble to contribute will be thought by many members of this House to be deeply discourteous.

Indeed, in the hours since news of this intention emerged, many colleagues from across the House have registered that view to me in the most forceful terms.

Bercow says the House should have a say on delaying the Brexit vote.

The speaker has accused the government of being "discourteous".

It’s clear as day that the Conservative government is in office, but not in power. May has no majority for any version of Brexit, so there must be a general election to rebalance the parliamentary arithmetic. But May’s tactic seems to be to cling on and up the stakes as we draw closer to 29 March, when the UK leaves the EU. So Bercow is quite right to call out the government. Because May is literally holding the country to ransom.