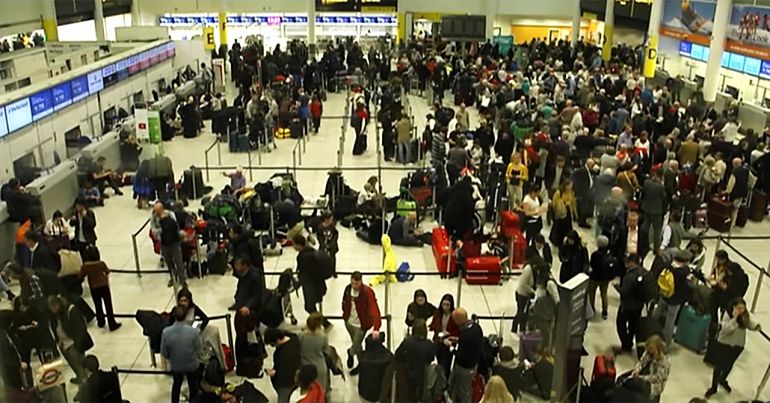 Gatwick Airport spent 36 hours in chaos. At least 100 flights were grounded between 19 and 21 December, resulting in major delays for 120,000 passengers. The police were called in. The army was called in. The press made it front page headline news. The culprit? Drones.

On 21 December 1988, Pan Am Flight 103 was destroyed and the wreckage smashed into the Scottish town of Lockerbie. 270 people died in the deadliest terrorist incident on British soil. It led to the passing of the 1990 Aviation and Maritime Security Act. This law was designed for the “suppression” of violence and other acts risking the safety of ports and airports.

Fifteen people were prosecuted on 10 December after preventing a deportation charter flight from taking off in 2017. They cut through fencing around Stansted Airport and locked on to a Boeing 767 for 10 hours. Prosecutors successfully convicted the Stansted 15 using the 1990 Aviation and Maritime Security Act, which carries a maximum sentence of life in prison.

Together, these three incidents peel back part of the veil around the UK’s border regime.

On the morning of 21 December, planes began taking off and landing at Gatwick Airport after “mitigating measures” were put in place. Transport secretary Chris Grayling told BBC Breakfast that this included “military capabilities”. Despite this, at the time of publishing, police haven’t yet caught the drone operator(s).

Assuming they are caught, though, the operators face a potential prison sentence. Speaking in the Lords on 20 December, aviation minister Baroness Sugg said:

the disruption caused by these drones is extensive … [they] have been flown illegally and anyone endangering an aircraft could face up to five years in jail.

This refers to the Air Navigation Order, a law amended in May 2018 to restrict further the use of drones around airports. That means officials are at present treating the incident as a criminal but not a terrorist matter. If only the Stansted 15 had been as lucky.

Police first charged the Stansted 15 with aggravated trespass. If this had stuck, the group would have faced a maximum of three months in jail. But after four months, prosecutors successfully changed the charge to “endangering safety at aerodromes”, part of the counter-terrorism law brought in after the Lockerbie bombing. As a result, when the Stansted 15 face sentencing in February 2019, the judge could hand them life sentences.

‘Shivers down the spine’

Both the Stansted 15 incident and the drones at Gatwick airport are non-violent actions. But the scale of their effects is vastly different. The ethically reprehensible flight targeted by protesters at Stansted was cancelled. And, as the Guardian reported at the time, other flights were suspended but resumed the same night. On the other hand, the drones at Gatwick Airport resulted in far greater disruption and, unlike the deportation flight, this has primarily affected the general public.

The discrepancy in penalties thrown up by the two incidents is telling. It suggests just how much the government wants to protect its shady practice of mass deportations. The Stansted 15 case also hints at the state’s attitude to wider protest. Soon after the group’s conviction, Amnesty International said:

The conviction of peaceful protesters on this excessive charge will send shivers down the spine of anyone who cares about the right to protest in the UK.

The 30th anniversary of the Lockerbie bombing looms over these two incidents. Abdelbaset al-Megrahi was convicted of the attack but protested his innocence until he died in 2012. Opinion on al-Megrahi’s guilt is sharply divided, with even families of people killed by the disaster pushing for an inquiry to uncover the truth. There appears to be a wealth of evidence supporting both sides of the divide.

There’s no doubt about the horrific results of the Lockerbie bombing. Its impact was devastating on a large scale. Memorials held on 21 December across two countries show that. But exactly three decades after the bombing, two major incidents playing out in its shadow expose the bias and intention of the UK government’s slippery attitudes to terrorism.

There is of course plenty of scope yet for the Gatwick airport incident to be treated more seriously than Baroness Sugg suggested. It’ll be interesting to see how attitudes change if the drone operator does in fact turn out to be an ‘eco-warrior’, as some have suggested. Until then, the differing rhetoric reminds us of the state’s disgust for those opposing its draconian border policies.