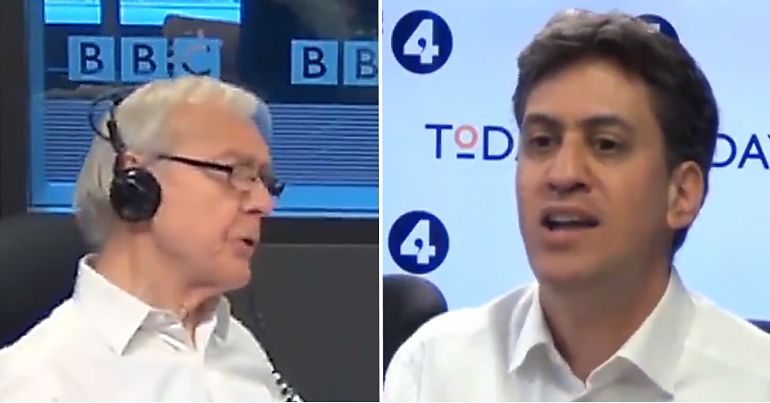 Ed Miliband took Today programme host John Humphrys to task over his imbecilic questions on 30 April. The Doncaster North MP was on the show to talk about the climate catastrophe after announcing he’ll serve on the Institute for Public Policy Research’s (IPPR) Environmental Justice Commission.

Humphrys’ interview style, however, left a lot to be desired. And Miliband debunked the host’s moronic questioning without hesitation.

Hands off our Costa Brava

Alongside joining the IPPR’s commission, Miliband has recently called on the UK government to “produce a revolution in climate leadership” by taking stronger action on the crisis. During the interview on the Today programme, he also spoke about some of the efforts people can make to help limit the climate breakdown.

Ex-Labour leader @ed_miliband says the government needs to be on a "war footing" to tackle climate change #r4today https://t.co/3mEgKQ6xxL pic.twitter.com/qHOQ55UNE6

Miliband argued for people to eat “less meat over time”. That’s not, however, how Humphrys ‘clarified’ the MP’s point to listeners. He commented:

Miliband attempted to make clear that he wasn’t calling for all meat to be removed immediately from people’s diets. He also responded to Humphrys’ question on flying by saying we “can’t have unlimited airport expansion” but that he wasn’t arguing we “have to fly less”. Humphrys appeared to think this was some kind of gotcha moment, saying:

See, this is the point, these great ambitions that you had are withering away.

The MP then gave the planned new runway at Heathrow as an example of what “we shouldn’t be going ahead with” in terms of airport expansion. After this, Humphrys went in for the kill:

Should we be going ahead with our holiday to the Costa Brava?

The BBC host’s message to Brits was clear: Miliband is coming after your meat and your cheap, sun-soaked holidays.

The Doncaster North MP cottoned on to Humphrys’ messaging, though. And he promptly called him out on it:

I guess the point is John… if we just say to people ‘you’re going to have to make sacrifices and life is going to be worse’, I don’t think we’re going to bring people with us.

This statement served as a dressing down to Humphrys, because it seemed to be exactly what he was doing. Miliband wasn’t the only one to call him on it either:

Ed Miliband showed great patience with the frankly idiotic and childish questioning by John Humphrys on such a critical issue facing this country and the wider world. #r4today

Why would @BBCr4today allow someone who isn’t prepared to do slightest amount of research or have even baseline knowledge to “discuss” (I use the word loosely) such an important topic vital to all our survival?

Meanwhile, some argued Humphrys’ interviewing changed depending on whom he chatted with and what they talked about:

I’ve only just realised there are two different presenters called John Humphrys on #r4today. One is very obsequious and always does the Tory/Brexiter interviews and the other is a hectoring old shite who always does the left wingers.

He only seemed in his comfort zone and happy when joking with Jeremy Hunt about both mixing up China & Japan.

Take home off air. It’s enough and I don’t need to start my day like this#Today #R4

We face a climate emergency. Climate change is the biggest threat to our economic and social well-being, and to our national security.

Politics needs to be on a war footing to deal with this enemy but too often it sends the message that business as usual will do.

On the Today programme, Humphrys sent a message that it’s ‘business as usual’ at the BBC. Even on an issue as monumental as the climate breakdown – where the future of life on earth lies in the balance – its presenters are manufacturing public opposition to action. Why? Because leftwingers are leading the argument for the change needed.