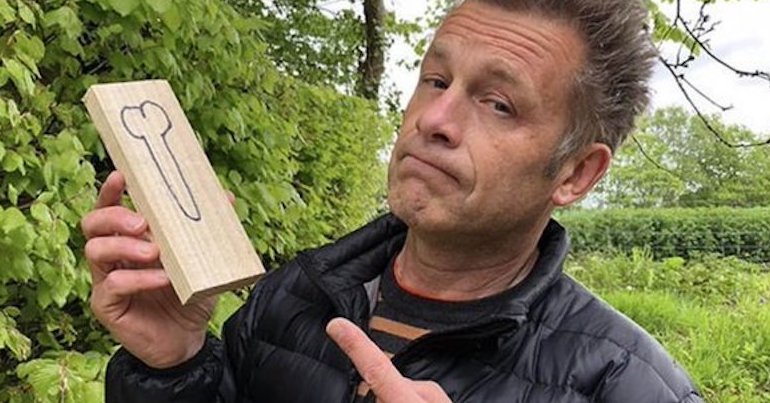 Chris Packham has received “death threats of a very serious nature”. But the wildlife presenter and campaigner’s response to these ongoing attacks and threats is just incredible.

On 25 April, Packham found two dead crows on his gate. Just three days later, he shared a video explaining he’d found “another gift”. This one, he explained was “handcrafted”. With characteristic understated humour he ran through a series of possibilities about what it might be, concluding:

It could be a penis and some testicles. And if it is… what I like about it most is that whoever drew it, has drawn it to scale based upon their own genitalia.

Later that day, Packham’s “woodcock” went up for auction on eBay:

Quite a few people had a very good idea , and I’m never one to turn those away , so . . . I’m very reluctantly putting my woodcock up for auction . Bid now – all the winning monies going to @WildJustice_org https://t.co/YsjxtA3Bft. Please RT pic.twitter.com/uy37HFglmc

At the time of writing, the auction is no longer live. It was set to sell for over £2,000. All money raised was intended to go to Wild Justice. Packham runs this group alongside fellow conservationists Mark Avery and Ruth Tingay. It campaigns to “fight for wildlife” through legal campaigns.

In solidarity, one small business created a range of products featuring “Packham’s Pecker“:

I have drawn up a design which is now available in my store. You can have it printed on t-shirts, mugs, even bedding.
I stand behind Chris Packham and wild.justice .
If you buy anything from… https://t.co/jUZ7UzD3Uf

As The Canary‘s Glen Black reported, by ‘coincidence’ Packham found the dead crows on the same day that Natural England (NE) introduced new rules around shooting many of England’s wild birds. It suspended general licences, which permitted the free shooting of 16 bird species including woodpigeons and crows. NE made the change following the first Wild Justice legal challenge, not to end culling full stop but to clarify the application of the law. And the move angered many in the pro-shooting community.

Yet, even as the threats increased after Packham found the “woodcock”, his response remained utterly brilliant.

On 30 April, Packham explained on Good Morning Britain that over the past few days he’s also had “packages sent containing human excrement” in the post. He then stated that police are investigating “death threats of a very serious nature”. Despite this, he said:

What worries me, is that the charities I’m affiliated with, the small businesses that I work for, these people aren’t set up to take this sort of abuse. And yet they’ve had to close their websites… because they’ve been bombarded by these bullies who want to take aim at me. My message is clear… leave them out of it.

He says 'take aim at me', but calls for people to stop targeting charities and organisations he's affiliated with. pic.twitter.com/9Br6hTpBTC

Later, he clarified his position even further on the BBC‘s Victoria Derbyshire show. He explained how serious and “calculated” the death threats are, alleging they’re designed to:

Elicit as much fear as possible. They’re unspecific about where and when… saying ‘you’ll never be safe, you’ll never be able to go out. We will always be there’… [and] listed a whole catalogue of things they might do.

But yet again, he emphatically stated what he sees as more important, stating:

I’m campaigning for change. People are resistant to change… We’re asking them to make some pretty tough decisions in order to protect the environment. I understand that certain factions… will lash out… [But] it will never sway me from my cause…

There are too few people standing up at the moment and fighting to protect our environment, our landscape, our wildlife. And there is no chance that I can step down. I just have to carry on and I will do so.

Chris Packham, please know that we stand with you too.