In less than three minutes, Labour shows how to fix the economy - Canary 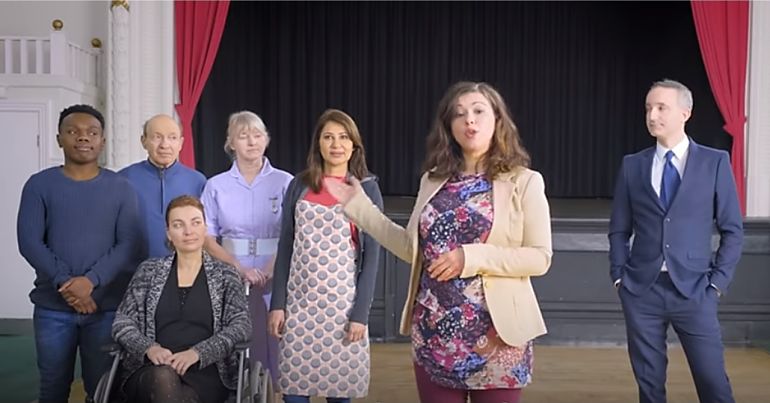 In less than three minutes, a new video from the Labour Party shows just how simple it is to fix the economy.

The video shows a scenario. It positions five people against one billionaire, asking the question: [0.00]

who’s better for the economy. Ordinary people, or billionaires?

In this scenario, the billionaire gets a £20,000 tax break. He pockets the cheque. Meanwhile, five people “who all lost money because of cuts and austerity” get “that money back”. A nurse gets a pay rise; a pensioner receives more pension. A woman in a wheelchair gains disability support as a student is given a grant, and another woman receives a small business loan. Each individual reflects a different aspect of the harsh austerity cuts in place since Conservative-led governments came to power in 2010.

The video shows how these people spend that money in their local community. As they hand money over to local businesses, the “people who get that money, go on to spend it too”. From here, government revenue increases to pay for vital local services such as “roads, hospitals and schools”. It also employs more public sector workers.

It’s a fictitious scenario, but it shows how easy it could be to regenerate the economy in local communities.

In contrast, the billionaire hasn’t spent a penny of his tax break. So none of that £20,000 goes back into the local economy.

As the video says, this simple model is “just common sense”.

The video is a simple way to foreground Labour’s economic policy under Jeremy Corbyn. As the 2017 manifesto states, economic success won’t be measured by the “number of billionaires, but by the ability of… people to live richer lives”.

Since Margaret Thatcher was in power, UK economics has been driven by the ‘trickle down’ theory. This insists that helping those with the most money – through tax breaks etc – means money ‘trickles’ back into the local economy. It’s now known that this simply doesn’t work; not just in the UK, but globally. Around the world, 1% of adults hold more than 47% “of household wealth globally”.

When Labour came to power under Tony Blair, there was some hope that economic policy could change. But Blair and Bill Clinton in the US pushed forward neoliberal policies that:

abandoned the left’s traditional commitments, especially to workers, in favour of a global financial elite and the self-serving policies that enriched them; and in doing so… enabled a sickening rise in inequality.

Wealth inequality in the UK has soared. In 2018, the Institute for Public Policy Research (IPPR) established that:

44% of the UK’s wealth [is] owned by just 10% of the population, five times the total wealth held by the poorest half.

Without radical change to economic policy, rich people will continue to get richer while poor people get poorer. This video shows just how simple such radical change actually is.