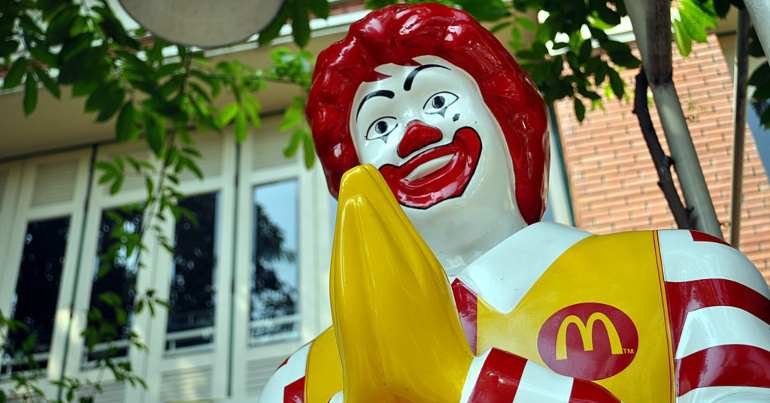 Fast food restaurant McDonald’s has long come under attack from anti-globalization campaigners for its homogenizing effect on global food systems, cityscapes, and local cultures. The marketing of its unhealthy and potentially addictive foods – especially to children – has also been criticized by public health advocates. Now, its marketing techniques seem to have become a bizarre caricature of the company’s own worst features.

On 6 June, McDonald’s in the US unveiled its new ‘International Currency Exchange’. Customers will be able to use foreign currency to purchase four new items on its so-called ‘Worldwide Favorites’ menu at participating US McDonald’s stores. This new menu includes the supposedly Dutch delicacy ‘Stroopwaffel McFlurry’ and a purportedly Spanish dish named the ‘Grand Extreme Bacon Burger’.

The marketing ploy is archetypal McDonald’s-esque corporate propaganda. Its practice of creating regional variations to suit local palates is long-standing. It introduced ‘Curry Burgers’ into its menus in India, ‘Samaria Burgers’ in Japan, and ‘Rendang Burgers’ in Malaysia and Indonesia. In doing so, it airs a spirit of diversity and worldliness. In reality, it’s creating a corporate monoculture that both malignly appropriates local cuisine while driving its actual providers out of the market.

“…at the rotten core of our broken food system”

The company’s destructive and homogenizing characteristics have been well documented. According to Boston-based NGO Corporate Accountability, “McDonald’s is at the rotten core of our broken food system”. Its website states:

No other entity has done more to shape today’s food system. McDonald’s has an unparalleled demand for consistent and cheaply produced commodities. It is the largest buyer of beef, pork, apples, and potatoes in the United States. And with its vast purchasing power and rapid expansion around the world, McDonald’s created strong incentives for corporate consolidation in agriculture, giving rise to Big Agriculture, including Monsanto, ADM, and Cargill.

And this process is far from confined to the US. It now has a global reach. McDonald’s is the world’s second-largest private employer. The company’s negative impact across the globe was extensively documented in Eric Schlosser’s 2001 book Fast Food Nation. Exposing the corporation’s impact on public health, animal welfare, and worker safety, it has been compared favorably with Upton Sinclair’s classic muckraking novel The Jungle.

An allegory for US power

But there is something deeper, more philosophical going on here. Fast food is not just culturally, environmentally, and nutritionally destructive, it’s also a potent symbol and tangible manifestation of US imperial power. It represents the conquering of the world by the US ‘values’ of so-called “free” markets, corporatization, and cultural imperialism.

Ziauddin Sardar and Merryl Wyn Davies, in their famous 2002 book Why Do People Hate America?, analyze the era of US world dominance through a cultural, historical lens. They devote a whole chapter to an analysis of the hamburger, titled “American Hamburgers and Other Viruses”. They write:

As a way of life, the hamburger is a seductive novelty with discernable, and deleterious, consequences. Not just because it is an omnipresent con-trick, but also because the consumerism it embodies is seen as a clear cultural threat. It personifies the way in which America is taking over the lives of ordinary people in the rest of the world and shrinking their cultural space – their space to be themselves, to be different, to be other than America. And America projects itself on the rest of the world as though it were a hamburger: a commodity, a brand, out to capture all cultural space for itself.

The founders of London Greenpeace, who later became famous for the ‘McLibel case’, put it more succinctly. They said that McDonald’s “epitomises everything we despise: a junk culture, the deadly banality of capitalism.” And as this latest marketing ploy reminds us, McDonald’s is a threat not just to public health, the environment, and animal welfare, but also worldwide cultural diversity.