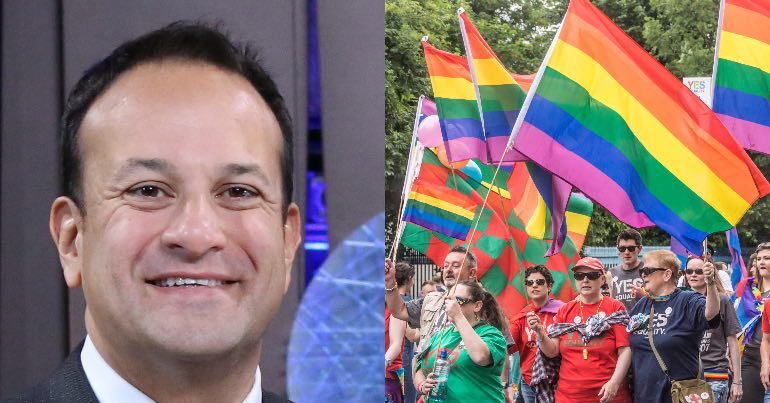 But people have reacted negatively to the addition, with some accusing GCN of overlooking Varadkar’s terrible history while in government.

Icons for the LGBTQI+ community

GCN is compiling a list of “Rainbow Icons” for the month of June. It said it’s doing this to celebrate “Irish queer icons who helped shape our community”. Included in the list is current Irish president Michael D. Higgins. GCN argued that he’s “a champion of LGBT+ and Human Rights”:

Next in our #Pridemonth celebration of Irish icons of the queer community is the current occupant of Áras an Uachtaráin, Michael D Higgins. Our President is a champion of LGBT+ and Human Rights, an eloquent spokesperson and a wonderful example of the best of Ireland #RainbowIcons pic.twitter.com/PHHmf6MbhA

Higgins has a long history of support for the rights of women and members of the LGBTQI+ community.

Also included in the list is former Irish president Mary Robinson. GCN added her for a number of reasons, such as advocating for LGBTQI+ rights and for being a “living legend”:

We continue our #Pride month celebration of #Irish #queer #icons with the beloved Mary Robinson. A champion for the LGBT+ community, former President of Ireland, UN High Commissioner of Human Rights, Climate Justice activist and a living legend to boot. #RainbowIcons pic.twitter.com/kd6Ixb0cUp

Robinson has also long supported the rights of women and the LGBTQI+ community. She had been a legal advisor to the Campaign for Homosexual Law Reform (CHLR) in the 1970s. Robinson went on to represent David Norris in his legal attempt to have the law on the criminalisation of homosexuality overturned. She succeeded and later, when president, signed the act which officially ended criminalisation.

But GCN also added Leo Varadkar to its list of “Rainbow Icons”. It stated that it included Varadkar because he’s Ireland’s first openly gay prime minister. And he’s one of only a few openly gay heads of government in the world:

An Taoiseach, @LeoVaradkar is the latest addition to our #PrideMonth celebration of #queer #Irish people. Becoming, at 38, the youngest person ever to hold the office, he is Ireland's first, and one of the few openly gay heads of government in modern times. #RainbowIcons pic.twitter.com/KOdZ2vHUOR

GCN has been widely criticised because of the addition. An Irish member of parliament argued that Varadkar is not an icon given his opposition to pro-LGBTQI+ legislation:

What #RainbowIcons block the #SexEdBill which would deliver LGBTQ+ inclusive sex education in schools?

One person went so far as to accuse Varadkar of being a “fraud” when it comes to LGBTQI+ rights: 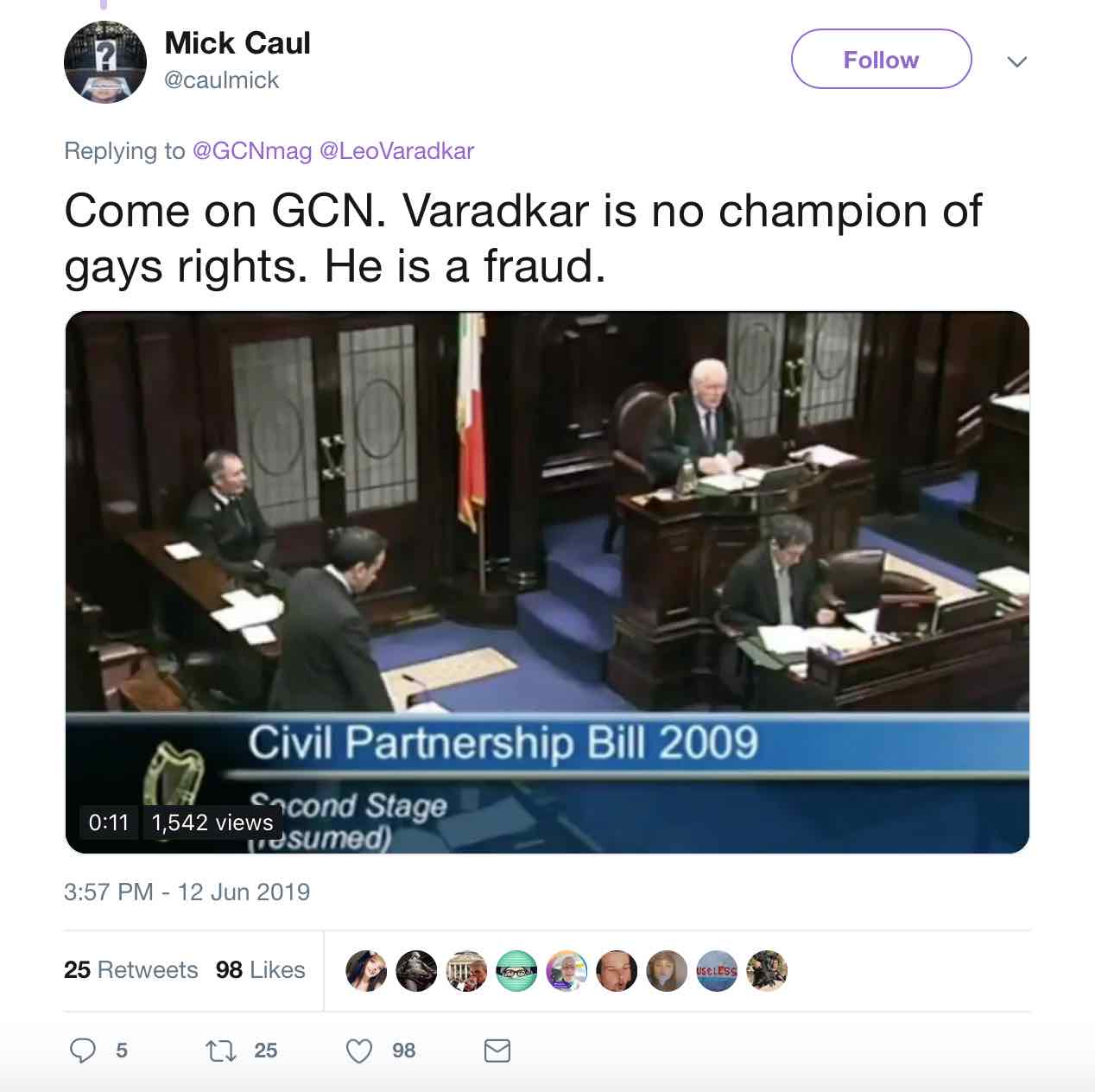 Another asked where are the gay icons from the left: 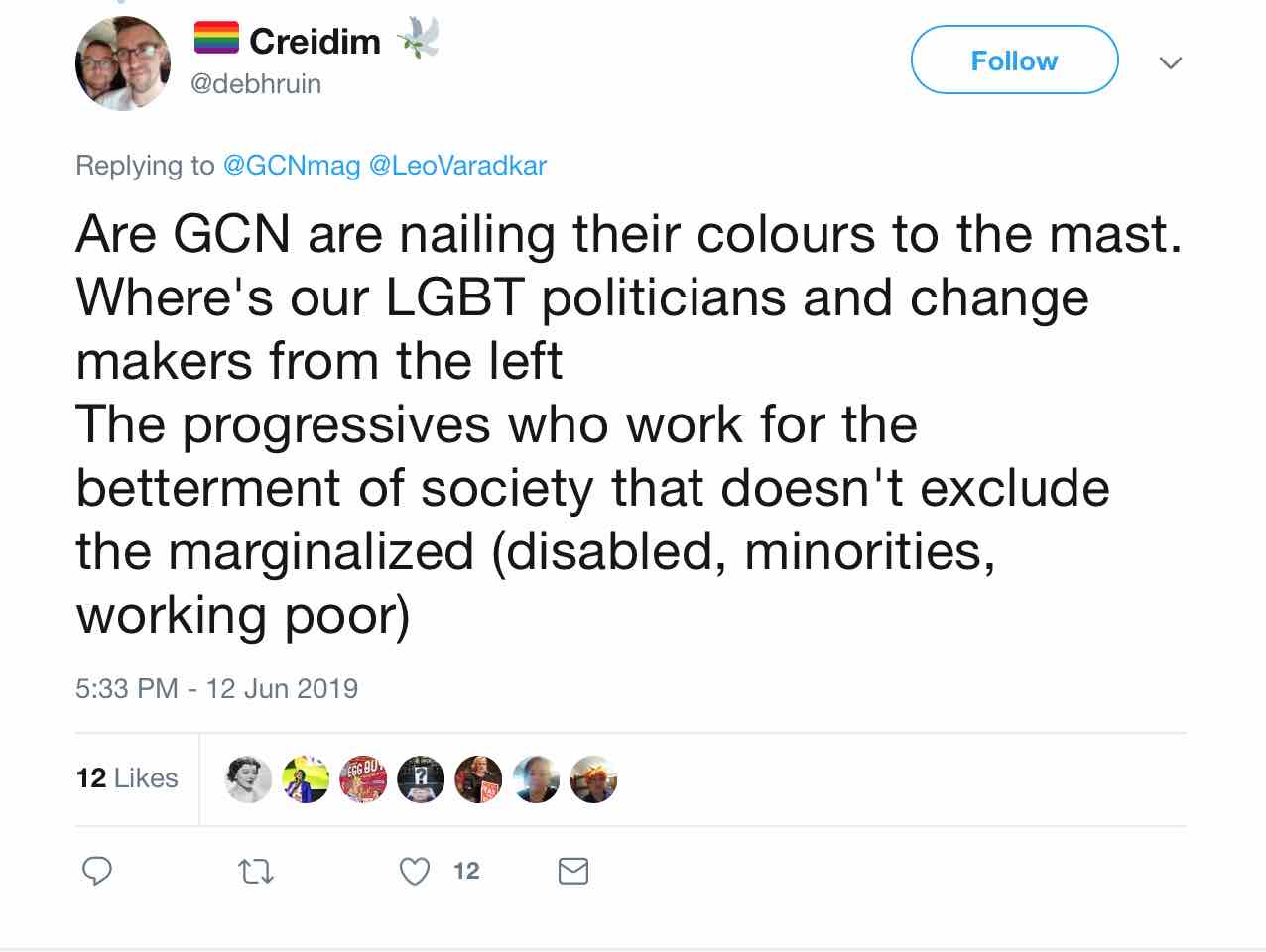 While yet another person compared Varadkar to Margaret Thatcher: 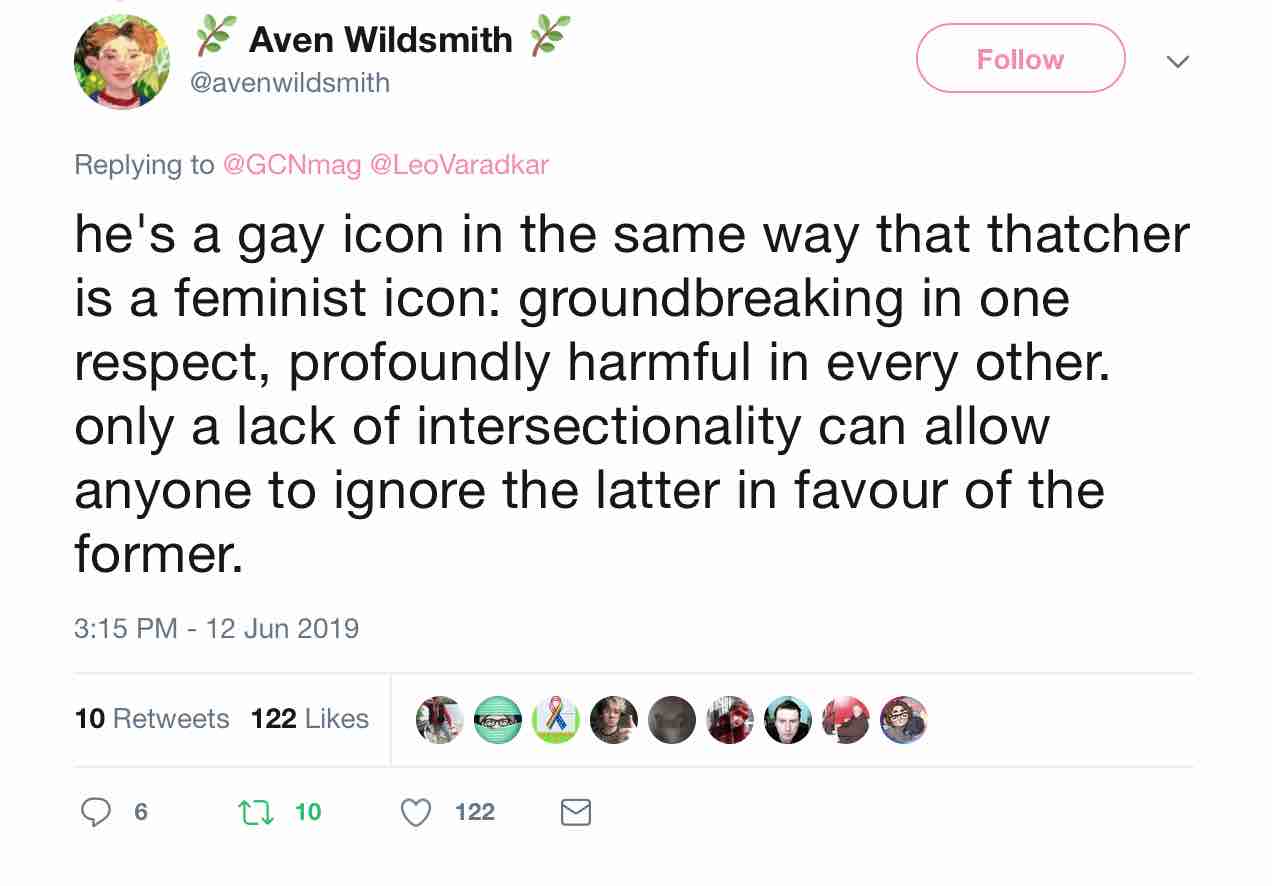 And one person pointed out the difference between Varadkar and his predecessor:

I'm hardly a fan of @EndaKennyTD, but the fact is that he acknowledged #gay Irish people, and visited places like #PantiBar, while @LeoVaradkar was still denying loudly that he was a member of the #LGBTQ community in #Ireland.#JonathanSugarman https://t.co/hgjA5O2PST

But this is not the first controversy to recently hit the Irish LGBTQI+ community. Queer Action Ireland announced that it’ll not be attending this year’s official Pride in Dublin. It argued that the inclusion of the Irish police in uniform in the Pride parade this year is “in direct opposition to the liberatory principles of Pride”. As a result, it insists that:

Cops marching in Pride is not a sign of progress, but rather a representation of the further cooptation of our struggle.

And it also declared its opposition to the inclusion of corporations and establishment politicians in Pride. Instead, it is encouraging people to attend an alternative Pride event on 29 June.

Pride for the people

One of Dublin Pride’s founders, Izzy Kamikaze (AKA Izzy O’Rourke) spoke to The Canary. She said that she appreciates all the work that goes into organising Pride. And she pointed out that it’s difficult to find non-commercial sponsorship. But she observed that:

And given that it’s “very precious to us all”, Kamikaze said it’s time to “recalibrate” what Pride is.

The Canary also spoke to Queer Action Ireland. It said that the reaction to its statement has been “fantastic” with “more interest and engagement than previous years”. It also said it believes this is:

reflective not only of the growing discomfort among the community with Pride’s commercialisation, but also a sense of anger around police involvement.

The group also agreed that Varadkar’s inclusion in the list of “Rainbow Icons” is “representative” of the problem with Pride and its “cooptation”.

The unfortunate fact is that many organisations have to rely on funding from large corporations. Dublin Pride’s sponsors include Amazon, eBay, Google, Twitter, Airbnb, and Dell. These same corporations then use this funding to deflect criticism of their abuses of laws and people in other areas.

Varakdar’s inclusion on the list of “Rainbow Icons” is similar. His identity is used to distract from his government’s policies.

Queer Action Ireland has recognised this and is trying to get back to the real meaning of Pride. And that means giving Pride back to the people and not fawning over corporations and establishment politicians.