Boris Johnson intends to force a 'disaster capitalist' Brexit on us, but Jeremy Corbyn is having none of it - The Canary 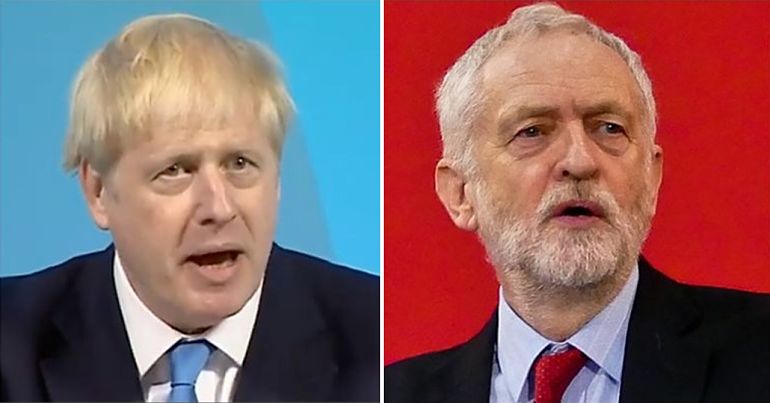 In an interview on Sophy Ridge On Sunday, Labour leader Jeremy Corbyn said his party was ready and prepared to fight an autumn general election. This comes as the ‘Brexit Gang’, led by Boris Johnson, is making it clear that a no-deal Brexit – sometimes referred to as the ‘disaster capitalist’ version – is looking more and more likely.

On Sunday 28 July, Corbyn declared that Labour is preparing for a general election:

"I've got my summer campaign plan in place, we've got most of our candidates selected in all our marginal constituencies" – Jeremy Corbyn tells #Ridge that he is preparing to take on Boris Johnson in a general election.

Corbyn made it clear what Labour will offer in regard to Brexit:

No deal we’ll oppose and we think people should have a final choice on it. They can have a vote then between remain and whatever option Boris Johnson decides to put to them at that time.

In other words, it would provide an opportunity for the electorate to have a final choice between remain and what Boris Johnson and his cabinet offers. He added that the same will apply if a general election sees Labour assume power.

Labour would campaign for Remain against either No Deal or a Tory deal that does not protect the economy and jobs.

fundamentally it’s about reducing inequality in Britain and about investing in good quality sustainable jobs for the future through the Green Energy Revolution.

And as for triggering an early general election via a vote of no confidence, Corbyn says he’ll examine that option once Parliament resumes in September.

Meanwhile, the Johnson cabinet is making its own preparations for an early general election, despite a denial to the contrary.

It’s been reported that the government is already publishing ads on Facebook. Also, Johnson has appointed his Vote Leave chief Dominic Cummings as his special adviser who is likely to help coordinate the election campaign.

No-deal will be a disaster

Two commentators writing in Bloomberg argued that Johnson is really aiming for no-deal as first choice:

Johnson is hardening the government’s position and putting the country on a war footing for a no-deal rupture.

Columnist George Monbiot has also argued that ‘disaster capitalism‘ is probably the real goal of a no-deal Brexit.

But a no-deal Brexit would be disastrous for the UK, except for those hedge fund managers and others who could be regarded as practitioners of disaster capitalism.

In 2017, the OECD stated that if Brexit proceeds, it would:

cause a severe negative shock to the economy and weaken GDP growth for many years, equivalent to a cost per household of GBP 3200 per year by 2030 at today’s prices, and as much as GBP 5000 in the worst case scenario

Also, a leading investment bank predicted that Brexit is likely to cause a massive recession in the UK, especially in the event of a no-deal.

Or, as Corbyn put it bluntly to Johnson in Parliament:

And for people up and down the land, it’s likely they will see food prices increase by up to 10%, given that nearly 80% of all food imported by UK supermarkets originates in the EU.

Plot to wreck no deal

The Observer has reported that former Chancellor Philip Hammond and Labour’s Brexit spokesperson Sir Keir Starmer have discussed parliamentary tactics and devices to stop a no-deal. This would involve taking control of Parliament’s timetable and mandating the prime minister to seek an extension of the negotiations with the EU. A vote of no confidence would be a last resort.

Other senior Tories with whom Starmer has talked on similar lines include Oliver Letwin and Dominic Grieve. Greg Clark and David Gauke were also mentioned.

And writing in the Guardian, Jonathan Powell, former chief-of-staff to Tony Blair, sketched out a possible scenario for Johnson should he fail to reach a deal with the EU:

When Johnson returns empty-handed from his European tour he will – given his lack of a working parliamentary majority for a no-deal Brexit – face two choices. He can go either for a general election or a referendum. Although the latter would be the right choice for the country, it looks likely he will go for the former. The polls will show him that with the progressive vote split, with Labour down to 20% and the Lib Dems at 20%, he could win a landslide in the first past the post system with an electoral understanding – even an informal one – with Nigel Farage. And he will know that if he waits too long into next year for an election, the recession will have begun to bite.

Like his predecessor, Johnson will have to rely almost entirely on the support of the Democratic Unionist Party to stay in power. But if we factor in the Tory rebels, he could be forced to opt for a general election prior to his Brexit deadline of 31 October. An electoral pact with the Brexit Party may therefore prove an advantage to him.

If Johnson includes no-deal as part of his election manifesto, and he wins the election, he could then argue he has a mandate via the ‘will of the people’.

But none of this addresses the myriad of other issues that affect the daily lives of the many, not the few. Corbyn highlighted such issues at this year’s Durham Miners’ Gala:

In Durham yesterday, I had just one question to ask. pic.twitter.com/bXu3ZqZgXI

And Corbyn again pointed out the stark difference between his vision and Johnson’s on 29 July:

Boris Johnson has no plan for our country. pic.twitter.com/THHudkJDKJ

The choice is clear: capitalism for the few, or social justice for the many.