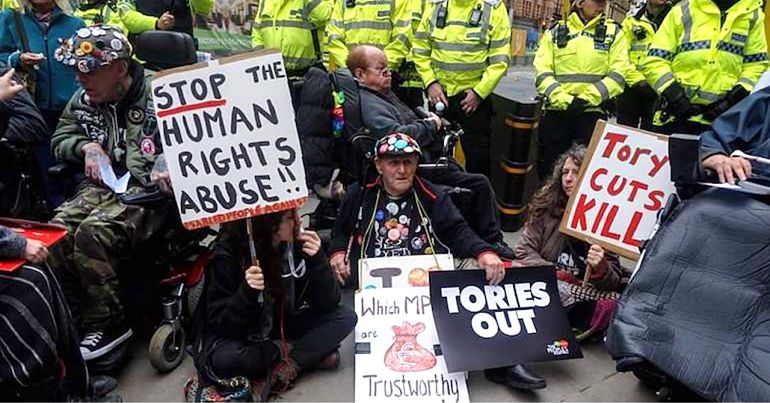 A freedom of information (FOI) request has revealed a shocking truth. A police force has admitted to sharing information about “disabled people and other activists” with the Department for Work and Pensions (DWP).

it has a written agreement to share information about disabled people and other activists who take part in protests with the Department for Work and Pensions (DWP).

Despite previous denials, this confirmed suspicions about “links between DWP and police forces… and the impact on disabled people’s right to protest”. In December, DNS reported that forces seemed to deliberately target peaceful, disabled anti-fracking protesters. Reportedly, this seemed to be an attempt to remove protesters’ disability benefits.

Greater Manchester Coalition of Disabled People (GMCDP) said it was “extremely concerned” that its local police force was “spying on disabled protesters and passing on their details onto the DWP”.

The police decision to collaborate with the DWP is about disrupting people’s ability to take part in protest and campaigns. It’s a perfect example of this type of disruption. It’s bad enough that the DWP already humiliates people who claim benefits. But if it’s going to go out of its way to find ways to stop people’s benefits – if they exercise what is supposed to be a fundamental human right – then I can see why people would be reluctant to potentially participate in something that may have a really terrible effect on their life.

This is a really worrying development, that I think is entirely vindictive. The suggestion that anyone who… takes part in protest if they’re disabled is likely to be committing fraud – which is what’s implied by the police getting involved in this – is about trying to make sure that the effectiveness of protest is undermined.

Condemnation of this news came swiftly, including from the Green Party’s Jenny Jones:

Here's today's friendly reminder that the police are not your friends, they're the sort of people who'll monitor disabled people at a protest and then report them to the DWP. #ACAB https://t.co/gEvahJcOFb

The police did the same thing in Blackpool against those disabled protesting against fracking.They checked vehicle registration & reported those with mobility leased cars to DWP.

In December, Lancashire police admitted to sharing “both information and video footage of disabled anti-fracking protesters” with the DWP.

GMP also admitted passing information about protesters to the DWP from anti-fracking protests in 2013 and 2014. DNS said this raised further concerns about the treatment of disabled people protesting against “austerity-related social security reforms”.

DNS also reported a lack of clarity over how formal this arrangement between GMP and the DWP might be:

GMP’s press office had initially suggested that it did have an agreement with DWP, before later denying there was one.

Following a second FOI from DNS, GNP “confirmed” this agreement. But it then failed to respond to emails until 24 July when GMP responded. It said it would “risk assess the agreement”. Yet DNS also said:

The force’s press office refused to comment… or to explain why it had previously claimed there was no such agreement.

Are we now saying if you can protest you should not be in receipt of benefits? Should disabled people stay locked inside their homes in case they are sanctioned?

Again, the shifting version of events between GMP and the DWP provoked anger:

❗️@gmpolice FINALLY admit it has written agreement with @DWP to share info about #disabled people who take part in #protests.

As Blowe explained, this news is linked to wider trends in police surveillance and legitimate protest:

Surveillance is about ways to label people as extremists and then disrupt their ability to be effective as campaigners. This is about finding ways to make sure you identify people who may well be seen as ‘a problem’ or as vulnerable and then ensuring that they are targeted. And that’s the reason why, unfortunately, disabled people have been targeted before.

We’ve seen that with targeting disabled people at fracking protests in Lancashire, with often very violent policing. This is about trying to discourage people. But also, because people often get really angry when they see somebody tipped out of their wheelchair. Often people want to react to that. So it’s a way of then being able to make other arrests as well.

As Dennis Queen, from Disabled People Against Cuts (DPAC) said, the agreement “sounds like a breach of our rights to engage in political protest”.

Awareness of these communications between police and the DWP came alongside news about shifting policing powers in the UK. Boris Johnson indicated that the term ‘extremist’ might also soon extend to anti-fox hunting activists.

Queen said that the agreement between police and the DWP would have:

a directly chilling effect on people’s ability to stick up for their rights and join in campaigns, both relating to disability and not.

In 2017, the UN described the situation in the UK as a “human catastrophe” due to “grave” and “systematic” violations of disabled people’s human rights under successive Conservative governments. So if the DWP and police now want to hinder their efforts to protest, it’s nothing short of disgusting.