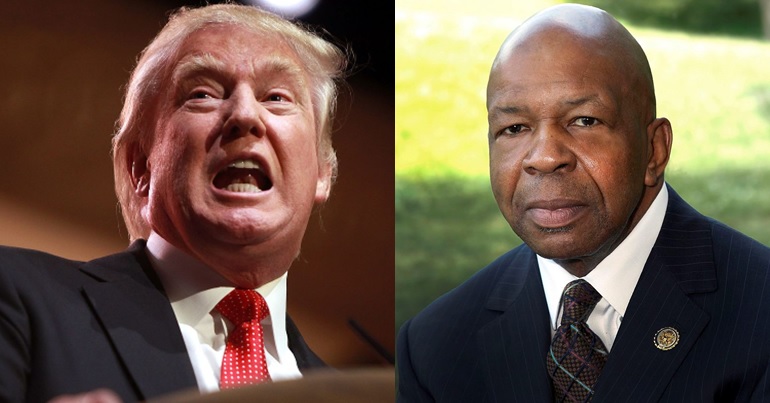 Donald Trump has sought to deflect criticism of his recent dog-whistle Twitter attacks by labelling a leading Black congressman as “racist”. But many people see right through his transparent and cynical attempt to appeal to racist voters by attacking prominent Black politicians.

Trump insisted his weekend comments referring to Representative Elijah Cummings’ majority-black Baltimore district as a “disgusting, rat and rodent infested mess” where “no human being would want to live” were not racist. He tweeted: “If racist Elijah Cummings would focus more of his energy on helping the good people of his district, and Baltimore itself, perhaps progress could be made in fixing the mess.”

At a hearing last week, Cummings accused a top administration official of wrongly calling reports of filthy, overcrowded border facilities “unsubstantiated”. He is also leading multiple investigations of the president’s governmental dealings. He has drawn the president’s ire, for example, over investigations touching on his family members serving in the White House. His committee voted along party lines Thursday to authorise subpoenas for personal emails and texts used for official business by top White House aides, including Ivanka Trump and her husband Jared Kushner.

Trump’s tweets on Saturday also charged that Cummings’ district, which includes Johns Hopkins Hospital, the Social Security Administration and the national headquarters of the NAACP, is “considered the worst run and most dangerous anywhere in the United States”.

Mr. President, I go home to my district daily. Each morning, I wake up, and I go and fight for my neighbors.

It is my constitutional duty to conduct oversight of the Executive Branch. But, it is my moral duty to fight for my constituents.

Mr. President, we can address this together. Two years ago, I went to the White House to ask you to endorse my bill to let the government negotiate directly for lower drug prices.

After a weekend of attacks on Cummings, the son of former sharecroppers who rose to become the powerful chairman of the House Oversight and Reform Committee, Trump expanded his attacks to include a prominent Cummings defender, Al Sharpton, who was travelling to Baltimore to hold a press conference in condemnation of the president. “Al is a con man, a troublemaker,” Trump tweeted ahead of the press conference, adding that the civil rights activist and MSNBC host “Hates Whites & Cops!”

Trump says I’m a troublemaker & con man. I do make trouble for bigots. If he really thought I was a con man he would want me in his cabinet.

He also slammed Trump in a damning speech:

“A pattern is a pattern”

Two weeks ago, Trump caused a nationwide uproar with tweets directed at four Democratic congresswomen from ethnic minorities as he looked to stoke ethnic divisions for political gain heading into the 2020 election. He called for Democratic representatives Ilhan Omar, Alexandria Ocasio-Cortez, Ayanna Pressley and Rashida Tlaib to get out of the US “right now”.

He said that if the politicians “hate our country,” they can go back to their “broken and crime-infested” countries. Three of the four politicians were born in the US. The House later voted largely along party lines to condemn his “racist comments”.

These politicians have since defended Cummings themselves:

This president wants to distract with his racism so he can avoid accountability for his corruption. @RepCummings is doing his job holding this administration accountable and bringing down healthcare costs, something the President wouldn’t understand. https://t.co/b5WEGgyG9c

.@RepCummings is an exemplary public servant. He fights for the left behind & unheard. Clearly the Occupant of the White House is intimidated by someone who is holding him accountable and exposing his abuses of power. The Chairman is effective& efficient in the pursuit of justice

Let me tell you a story about Chairman @RepCummings.

Before new members are assigned to Congressional committees, we have to make our case to the chair.

Chairman Cummings was TOUGH. I sat down in his office to make my case for Oversight, and I was quite nervous. https://t.co/u1mRAR5epX

By the end of the mtg, I had no idea if I made the cut.

If you look at Oversight, it includes many all-stars of Congress.

From @RepRaskin to @RoKhanna, Cummings is a legendary coach who brings the best out of everyone.

He makes the country better. You want to be on his team.

“Look, our President has a hate agenda. He doesn’t have a policy agenda and that’s what he falls down on,” Rep. Rashida Tlaib says in response to President Trump’s attacks on Rep. Elijah Cummings and Baltimore. #CNNSOTU pic.twitter.com/zHdBcCT5Wt

Journalist Joy Reid, meanwhile, highlighted Trump’s hypocrisy. She quoted on her Joy AM TV show from a 2017 article which read:

A pattern is a pattern.

Others have also seen a clear pattern emerge in Trump’s attacks:

Hm, what is it about the members of the House that Trump aggressively attacks? Ilhan Omar. Ayanna Pressley. Maxine Waters. Elijah Cummings. John Lewis. Rashida Tlaib. Alexandria Ocasio-Cortez. I feel like there must be some common trait they share. Can anyone figure it out? 🧐🕵🏻‍♂️

Whatever could they all have in common…? https://t.co/30DWTtCmWv

Overt Racism on full display here. Always criticizing the non-white members of congress. This is a clear pattern.

Indeed, Trump is clearly trying to put ethnic polarisation at the centre of his appeal to his base of voters. Fortunately, many people see his racist tactics as the disgusting and cynical manipulation that they are.